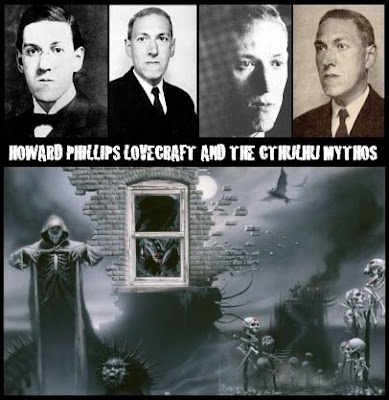 Pronounced by the creator of the mythos as Khlûl'-hloo, H.P. LOVECRAFT’s work The Cthulhu Mythos, lingers today as one of the greatest concepts in genre fiction. The combination of unreal horrors and the response of unquestioned reality of the human mind is the subject of his writing. His universe is a terrible place, where there is little hope, and humanity cannot comprehend the world that used to be normal but now is inhabited by terrible things.

Lovecraft was a person unmoved by emotional things. He considered religious views to be abjectly pitiable, that is, he saw the need for religion as coming from a source of weak minds and fear. The result of his views about belief clearly underpins his views on the structure of the universe, the cosmology of this world, and his fictional mythic universe he created. The Gods and their minions are largely above even thinking about humans, for they are considered little more than talking meat. The world in which humans live is alien to those Gods, called the Elder Gods, because of the vast knowledge and view towards the universe that those Gods have. That is, humans live in a universe where beings far more powerful exist, who do not even pay attention to humanity beyond an annoyance, and upon earth we discover them and their schemes at our own risk and detriment.

The world created by Lovecraft was stark, brutal, but also, measured in how much the human mind could describe and endure before collapsing. Some reviewers and critics considered his use of language to be filled with archaic terms, hyperbole, and unconvincing characters. But in saying/writing/asserting so, those critics miss out on the great ability of Lovecraft to create horror. Since the action mostly happens off camera, and the narrator is the reader’s eyes to the event, the language evokes antiquity, the hyperbole reflects the narrator’s inability to comprehend exactly what is happening, and the characters themselves are portrayed far better than the critics suggest because unlike most fiction, the major characters in this are neither heroic, nor victims, but observers. While there are some heroes certainly, the event of the story within such a powerful setting is the reason for the trip, it is by no means due to the characters nor the genre nor language of the writer.

Why does it succeed? I believe that Lovecraft’s horror succeeds because it doesn’t rely upon formulaic patterns, however much it uses templates, archetypes, and devices. It uses stereotypes of human races, and gender, but it does so in the context of the work being considered. Lovecraft did believe in his race’s superiority, and it would be foolish to suggest otherwise, but as part of a early twentieth century piece of literature it is neither out of place nor should it be unexpected. I’d suggest it is regrettable, but I also think it is not something that should remove greatness from the memory and view towards Lovecraft’s work and legacy of intellectual creations.

I recommend the written works of H.P. Lovecraft, the critical works of S.T. JOSHI regarding H.P. Lovecraft, and hope you can get into the quality of the work without being distracted by the baggage of it.
Posted by alex-ness at 5:11 PM 2 comments:

Therefore, popularity is important even when quality should seem more an absolute, and definable. You might like something, but it doesn’t make it good, but if nobody likes something, the ability to judge its impact will leave it forgotten or ignored. An artist told me to never stop working, that hunger, depression, fatigue are all good, if it means that the work will survive and be born. But we don’t live in a society that accepts, loves, or nutures the arts. We live in a society that commodifies the arts or ignores them based upon its own needs.

Starving artist is a cliché term referring to the fact that artists and creatives in general who commit to their work rarely make money, but to become the best in what you do, you must do that. You must make a choice as a creative, to do it for the work, whatever the reward, or to do it for the reward, and if there is none move on. All of the arts are peopled by talented creatives. But there are also people who succeed because of marketing what they do to the people who will respond... An artist who does not see that money is part of their work will starve.

This is not all to say that a creative should not do one or the other, or both. It is to say, that, for the world to appreciate the work, is to redeem the effort. To buy the work is to redeem the creative artist. Support a living creative, buy their work.
Posted by alex-ness at 3:13 AM 3 comments: