IT IS A CRIME: Recommendations for people wanting to read comics about crime 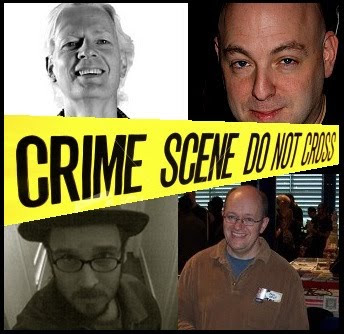 I get told that comics are all super heroes and anime. I get told that a lot. And, I understand that. I get that by watching what becomes made into movies, and by looking at sales figures, and by trying to write concepts and stories that aren’t super heroic for comics that never get published. Comics are not only super heroic, but to deny the ascendancy of super heroes in the medium of comics is foolish.

So, I might, depending upon the response here, through comments or emails, begin a project of giving recommended readings for people who like comics but grew out of or away from super heroes. Today I am giving recommendations for four authors, because, at least in crime comics, it is not nearly so much about the art, as it is the story, and when both artist and writer are good, Crime stories in comics can be great.

The first author is also an artist, and he creates a comic, irregularly but often enough to have a total of six volumes collected called KANE. Paul Grist is a creative talent who doesn’t paint or write pretty pictures, he writes and illustrates real ones, despite his use of a highly stylized line and drawings. I find his work to be fully deep, and the art to evoke the darkness of emotions that you only rarely find. I also read and buy JACK STAFF, a work done by Mr. Grist, but of the two brilliant series, I prefer KANE. The series reminds me of the Steven Bochco television police stories like NYPD BLUE and HILL STREET BLUES. And by saying that, I do mean it is good. 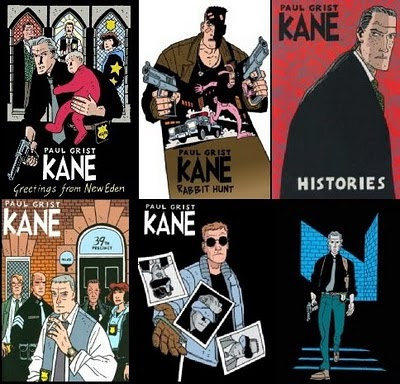 Brian Bendis is a big ass talent, perhaps considered the star writer of Marvel comics, and arrived where he did following years writing and honing his story telling, through crime stories. My favorite of his pure crime, not super heroic or spy oriented, is TORSO, which is ably but not beautiful drawn by him. Talented writer Marc Andreyko joined him on project, and when reading it, you might be amazed how powerful the work is, and then move on to read the true story it was inspired by, in Bendis’ hometown of Cleveland. The strength of Bendis is often said to be his ability to write dialogue, but in crime stories, the strength of his dialogue is to create mood. He is an expert with crime stories. 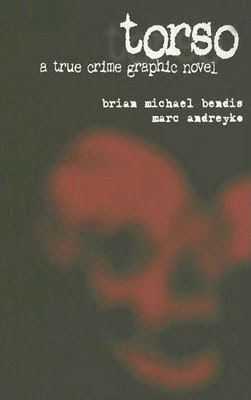 I consider Steven Grant to be a greatly talented writer who has never received nearly as much credit or praise as he is deserved. He writes everything but his chief genre of excellence is crime. As such there is no one more worthy of a recommendation for work writing in the genre. He made Punisher a gritty fighter of crime, but made him palatable as much as an anti hero can be. He wrote various series such as Damned with artist Mike Zeck, and that was well worth reading, and perhaps someone should consider it as a movie. But Grant’s latest work that tweaked me was 2 GUNS. From publisher BOOM it is able to tell without epic violence or much graphic language a truly criminal tale. If Grant writes it, I will buy it. 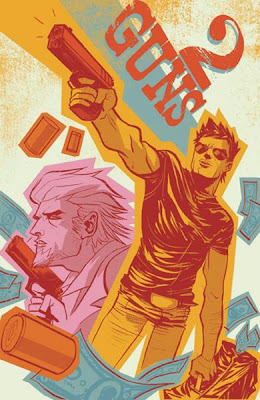 Ed Brubaker’s work on Sleeper and other works is deserving of praise. But I think he excels when he writes about crime. He did so perfectly on Daredevil following Bendis, who both moved the character from super heroic to costumed CRIME fighter, and his work on Gotham Central, as well. He seethed crime. I read a great deal of his work, but it really only hit fever pitch first on Sleeper which is about agents and dark tides of human events, and from there to CRIMINAL. His understanding of human darkness is very finely hone. 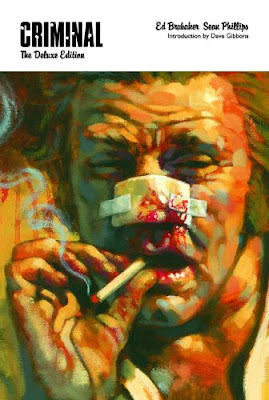 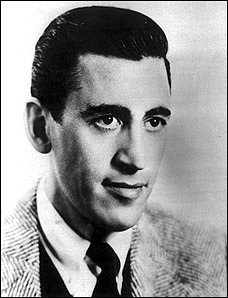 A creative talent and his work... JD Salinger wrote, made an impact and then refused to be drawn into public, for praise, criticism, or further work. He was then labeled a recluse, an enigma and other terms. In a sense, he let his work speak for itself. However, by refusing to create more for public consumption and refusing to be a public figure, he elevated the importance of his work, letting all interpretations be left to their own design. Rewards, financial and critical are generally thought to be the reward an artist seeks. So what of Salinger?

I say his reward will be the fact that his work will exist and endure beyond his life, due to his refusal to become the author of it, more than he was in fact the steward of it. He lived a long life so I am not saying he should still live, damn the shortness of existence, but literature circles will always wonder what could have been had he chosen to contribute more to their worlds.
Posted by alex-ness at 10:20 AM 2 comments: Links to this post

First read the review/consideration I did HERE and then come back. 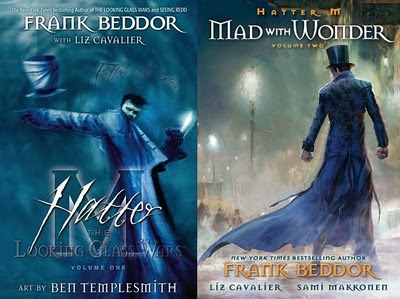 This series is part of a broader story told in Frank Beddor’s The Looking Glass Wars books. The world considered is on the surface the world of Alice in Wonderland, of Lewis Carroll, but Beddor has argued/discussed the fact that Lewis Carroll was mistaken, and told a story wrongly about a person, named Alice as a fantasy, and surreal even nonsensical place called Wonderland. Beddor suggests that Wonderland is real, that Alyss, spelled thusly escaped to this world, told her story, and Carroll tried to tell it, but presented it as fiction when in fact, it was an oral history. However that all plays out, Hatter M follows the story of Alyss, by extension but primarily through the eyes of her bodyguard. Following a coup d’etait Alyss, Queen of Wonderland is chased into exile with her bodyguard Hatter Madigan. He is equipped for battle, with a suit of weaponry, and expertise in combat. And the two become separated, while escaping from the evil new Queen’s rage.

In Volume One Hatter Madigan arrives on our historic Earth separated Alyss Heart, crown princess of Wonderland. Travels through the historic past lead him to France, as part of a 13 year exile and journey, Hatter Madigan tries desperately to find and protect Alyss. His hat takes a life of its own through out. The reader learns that the only hope we see, is the “white imagination” that powers Wonderland is a clue to how to help find Alyss, in the largely dark and violent world of the 19th century. Volume Two, takes Hatter M to the American Civil war, and the world in chaos from the conflict. Deeply tragic, and without ability to utilize his best warrior’s instinct, Hatter M is soon driven to madness, and his namesake, the mad hatter becomes reality.

Throughout the first book you marvel at the ability of Ben Templesmith, and you wonder how much of the wonder and beauty, however dark, is all the majesty of his artistic talent and genius. The story, however important as an ancillary work to the Looking Glass Wars, doesn’t take a lot of form until the near end of book one. With book two and artist Sami Makkonen you can see more of Beddor’s story, and the art, while different, is nonetheless still brilliant.

And I have to say, as someone who has read the book series that this is a chapter of, the story is both important and well done. As any creative work must succeed upon its own merits, do these two books entertain and offer a complete work to enjoy? That is, could a person unfamiliar with the book series enjoy these? Yes, but admittedly, I think less so. However, the books are really enjoyable, so go read them too.
Posted by alex-ness at 9:39 AM No comments: Links to this post 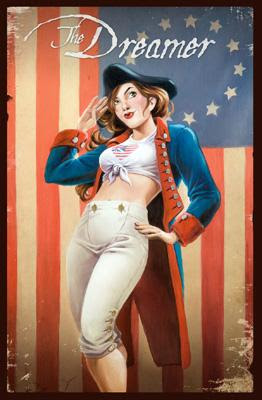 DREAMER HAS FORM AND SUBSTANCE

(Columbus, OH) –January 25, 2010 -- Lora Innes’s THE DREAMER, a romantic and rich story told with well-researched historical accuracy, has captured the hearts of young minds becoming a finalist in the 2009 Cybils awards.

The Cybil’s awards are unique in that the goal is to show the insight of the community of Children’s and Young Adult Bloggers for book related products. The awards are given to those products that show kid appeal doesn’t have to lose substance. The Dreamer has also been nominated in the 2009 Harvey awards for Best New Talent and Best New Series.

THE DREAMER tells the story of seventeen-year-old Beatrice Whaley, a student who begins having vivid dreams about a brave and handsome soldier named Alan Warren, a member of an elite group known as Knowlton’s Rangers that fought during the Revolutionary War. Prone to keeping her head in the clouds, Bea welcomes her nightly adventures in 1776. But it is not long before Beatrice questions whether her dreams are simply dreams…or something more.

For more information click here
Order it here
Posted by alex-ness at 7:57 PM No comments: Links to this post

A Christmas poem and image collaboration, and more

An Interview of me by Marc Kleinhenz (msunyata)

Series of Poems and pics by Alex Ness and Marc Kleinhenz

Yeah, Christmas is over, but due to weather or money or mean people it probably sucked. So here is your chance to read a bunch of poems with interesting pics, and then an interview with me by Marc the photographer.
Posted by alex-ness at 8:52 PM No comments: Links to this post

Everything Old is Newave Again

I had forgotten about this, but a couple friends of mine have seen it and brought it to my attention.

About a year or so ago, an artist named Michael Dowers asked for permission to reprint a cartoon of mine in a collection he was compiling of Underground Comix. Michael was in the nucleus of a group of underground cartoonists in Seattle during the Minicomix Boom of the 1980s. This was back in the Antediluvian Past, before the discovery of things like Fire and the Internet, when the advent of the Local Photocopy Shop had opened up a new dimension for the amateur comic book artist and promised a glorious new age of creativity allowing the Common Man to enter the field of comics.

(Naturally, I used this creative freedom to do parodies like Rambi and Brisbane the Barbarian and Arizona Schwartz the Lost Archaeologist).

Anyway, the quarter-page minicomic, photocopied on 8 1/2 x 11" paper and sold out of your backpack when lucky or traded for someone else's minicomic when not, has largely vanished today, superceded by the Webcomic. But Dowers has collected a sampling of some of the prominent artists of the Do-It-Yourself Comix era. And I'm in there too.

His book: Newave!: The Underground Mini Comix of the 1980s will be published by Fantagraphic Books this year.

Now I've forgotten which strip of mine he asked to reprint; so I guess I'll be surprised when it comes out.
Posted by kurt wilcken at 7:51 AM 2 comments: Links to this post 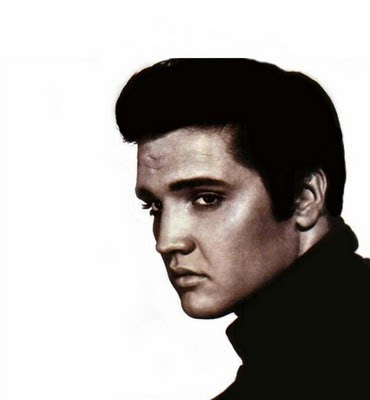 Elvis Aaron Presley born, January 8, 1935 and died, August 16, 1977 was the entertainer of the century for American popular culture. He is referred to as simply "the King" in recognition of the massive impact he had upon music, movies, and in general, the phenomenon of stardom. His movies might not have been considered critically good, but they were popular. His music was considered to be good but derivative of the black music coming out at the same time in his era. But he wasn't unoriginal, nor should he be seen as a carpetbagger of any one else's style. Nobody came close to what he did, then, nor since. He might have faded into the mist as an aged star, had his life not been lost to drugs at 42 years of age, but we will never know. And his talent truly remained had he been interested in making continuous runs at the top. 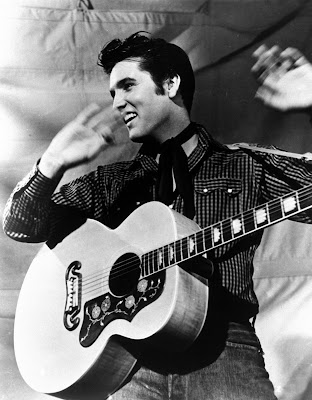 Posted by alex-ness at 3:34 PM No comments: Links to this post