Although Poplitiko has had many authors

Currently we are just two and sometimes three authors.

Kurt Wilcken and I have known each other since 2002.  I've known Paul Ewert since 2007. (Or so.)  And I've known Poplitiko Emeritus Author Marc Kleinhenz since 2008.  All of the staff here are people I trust, OK, what the hell, I love em.  I love them all like Pac Man loves to eat those dots on the screen.

Anyhow I am here to briefly announce that I have an Amazon author page.

I will be back soon with more thoughts about popular culture. 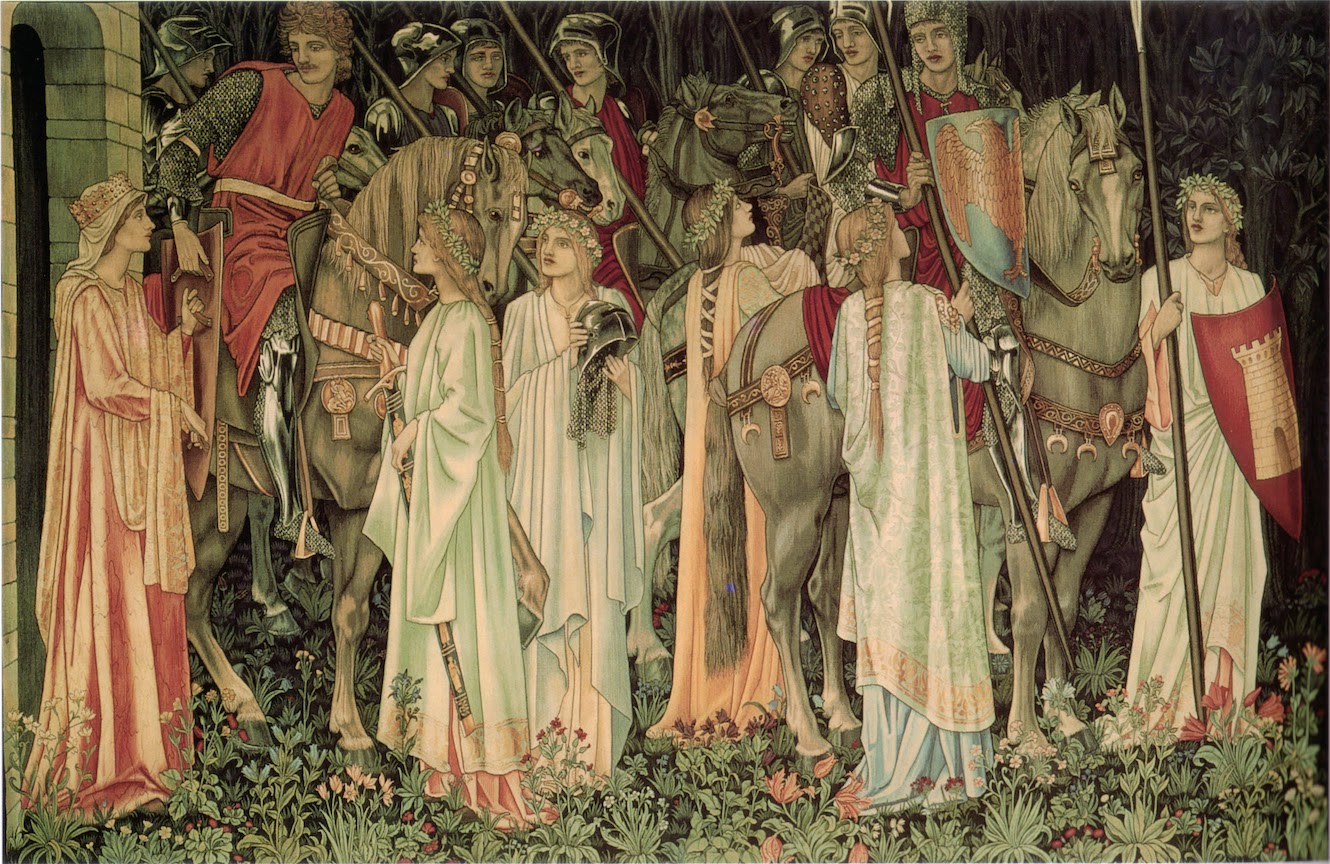 (Edward Burne-Jones: The  Holy Grail: The arming and departure.  A tapestry)

Posted by alex-ness at 1:58 PM No comments: Links to this post

The Smile of the Bat 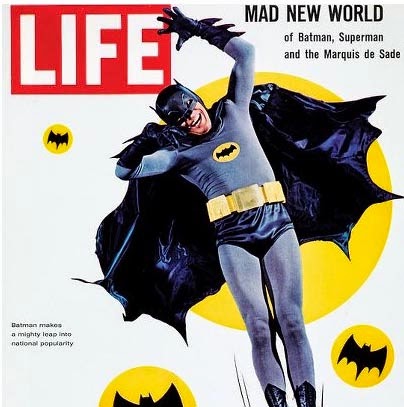 Strangely enough, I didn’t read many comic books as a kid, with the exception of my Dad’s collection of POGO books in our basement and the comics pages of the Sunday newspaper.  I’m afraid I had a kind of snobbish attitude towards them; I read real books, like Jules Verne and H.G. Wells.  But on one occasion, my parents bought my brother and I each a comic book and those books, although I can’t say exactly changed my life, stayed with me in my imaginations and my memory.

One was an issue of BRAVE AND THE BOLD featuring a team-up between Batman and the Atom in which Batman winds up in a coma and the Atom helps him solve his own murder by shrinking down to microscopic size and running around on the surface of Batman’s brain to stimulate it into moving his body.  The other was a DETECTIVE COMICS which featured the epic conclusion of Archie Goodwin and Walt Simonson’s Manhunter series.  The Manhunter/Batman story in particular impressed me with Simonson’s stunning artwork and I tried lifting some of his visual techniques in some of my own cartoons.

But there was more to those comics than that. This was during the mid-’70s, when DC Comics was putting out 100-page issues, cram-packed with reprint goodness.  In addition to the featured story, those two comics also included, between the two of them, a surreal Golden Age Spectre story, Steve Ditko’s origin story for the Creeper, the Viking Prince, the Golden Age Green Lantern’s first battle with the Sportsmaster, and a fantastic story in which Dr. Fate and Hourman team-up to fight not just Solomon Grundy, but a zombie Green Lantern.  My brother and I must have read and re-read those two comics for months.

But in some ways the strangest story of them all was a reprint of an old Batman and Robin tale from the ‘40s.  To explain why, let me back up a bit.

The first thing that struck me when I read those comics was the ears.  DC had recently re-designed Batman’s costume giving him a cowl with eight-inch long bat-ears pointy enough to put someone’s eyes out.  The second, and more significant thing I noticed was how serious Batman was.  I was familiar with the TV Batman, of course, who would smile and shake hands with Robin before proceeding to beat the snot out of criminals in the animated opening; but in the ’70s DC went through a process of trying to de-silly the Darknight Detective..  This Batman wasn’t just serious, he was positively grim.  The way Walt Simonson drew him, Batman was frowning so hard it looked like his face was going to break.

But one of the comics, I forget which one now, also had a Golden Age Batman story in which he and Robin match wits with a couple villains I hadn’t heard of before named Tweedle-Dum and Tweedle-Dee.  This looked more like the Batman I’d been familiar with.  His ears were a reasonable length and didn’t look like they were compensating for anything.  He could joke with Robin while punching out thugs.  He actually smiled.  This was a Batman who clearly enjoyed his work.  The cognitive dissonance between the two stories was enough to give my poor 10-year-old brain whiplash.

It was many years later that I started seriously reading comic books; about the time Frank Miller’s THE DARK KNIGHT RETURNS came out in fact.  If the Batman of the ‘70s was grim, Miller’s Batman was ultra-grim:  a bitter and angry, obsessive old man in a corrupt and crime-ridden city.  Miller told a powerful story and his comic was certainly ground-breaking.  DARK KNIGHT RETURNS is a good comic, but I’m not sure I’m so happy with its Batman becoming the Definitive Batman.

DARK KNIGHT RETURNS was set in a Gotham City that was dark and crime-ridden because it had deteriorated since Batman’s retirement.  Succeeding writers decided that Gotham was always a dark and corrupt city.  The DARK KNIGHT Batman was a bitter old man who’d been stewing in his obsessions for decades.  Later writers grafted this attitude onto the present-day Batman.  And then there’s the whole thing about his relationship with Superman.  There once was a time when Superman and Batman were buds, and regarded each other as peers.  DARK KNIGHT played up their differences, and it’s Bruce Wayne was contemptuous of Clark Kent. Now, granted, Miller handled this well, and gave the reader the sense that there had be a friendship between the two men at one time; and his portrayal of Superman is more sympathetic than perhaps a lot of readers have given credit.  But that hasn’t stopped other writers from seizing on this antagonism as the defining dynamic between the two characters.

Max Alan Collins, a prolific mystery author who has also written comic books, was once asked to write an introduction for the trade paperback compilation volume of DARK KNIGHT RETURNS.  The piece he wrote was rejected, and he later claimed it was because in the introduction he said that Frank Miller’s dark and psychotic Batman and the campy Adam West Batman from TV were both legitimate interpretations of the character.

A similar sentiment was expressed in an episode of the animated series Batman: The Brave and the Bold in which the Bat-Mite directly addressed Batman‘s fans:

“Batman's rich history allows him to be interpreted in a multitude of ways. To be sure, this is a lighter incarnation, but it's certainly no less valid and true to the character's roots than the tortured avenger crying out for mommy and daddy.”

There was a classic Batman story from the ‘70s in which Bruce Wayne takes some disadvantaged Gotham kids out on a camping trip, and he overhears them talking about the Batman.  Each one has a different , fanciful idea about what the Batman is really like.  Bruce changes into his costume and comes out to surprise the kids.  “Actually, Batman looks like this!” he says.  The kids laugh:  “You can’t fool us, Mister Wayne!”

It’s hard to imagine the current-day Bruce Wayne taking time off from his War on Crime to organize a camping trip or putting on his costume to give some kids a treat.  Nope, he’s too busy wallowing in angst and grim determination.

Which I wouldn’t mind if it gave us good stories and if this uber-grim attitude was confined to the Bat-Cave, but one of the downsides of the Grim ‘n’ Gritty Era is that it has given writers the sense that Gloom equals Realism and if Dark Angst works for Batman, it should work for other heroes too.  This is why the Man of Steel movie gave us a Superman dressed in a costume of reddish-grey and bluish-grey,   Back in the early ‘90s, the short-lived TV series based on THE FLASH tried to look as much as possible like Tim Burton’s Batman, set in a city of eternal night.  The newer TV series is a little wiser, allowing Barry Allen to run around in the daytime occasionally, and giving him some fun in his life as well as angst.

I suppose it’s too late now to avoid sounding like a Cranky Old Fan.  But I like my comics and my heroes to have a sense of Joy about them.  I don’t insist that they all be “Bwa-ha-ha” funny like the old JUSTICE LEAGUE INTERNATIONAL, or that Batman fight goofy space aliens as he did in the 1950s.  But I would like some sense of fun; some sense that the heroes are allowed to enjoy themselves on occasion.

The Source waters and the branches of the river

There is truism that, there is nothing new under the sun.  That is, everything comes from a previous source and follows a pattern or path that repeats a theme that was created eons ago.

Pygmalion, a play, and book by George Bernard Shaw refers to a poem by Ovid, from ancient Rome, about a sculptor who created a piece of art, and fell in love with it.

A favorite work of art that I adore is Edward Burne-Jones "The King and the Beggar-Maid, is not only fantastic, but it tells a story that is said to echo to the present, but has tendrils that explains the basic story of a high classed person dealing with a lower class person, only to learn how magnificent the person beneath the assumptions of class is.

The 20th century has shown us numerous examples, in both higher to lower, and lower to the higher class movement.  As well, the examples of the higher class teaching the lower falls into gender separations as well, with men teaching women, and women teaching men, and to throw a curve, ... the 3 Stooges were taught by a Professor and his daughter.    If everything has a beginning, we can thereby trace it from the current stream back to the source.  Part of the great adventure of popular culture, we can find and watch and consider all of it. 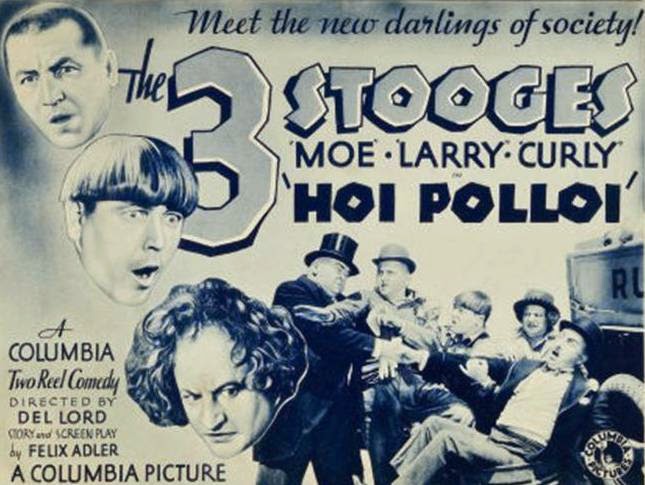 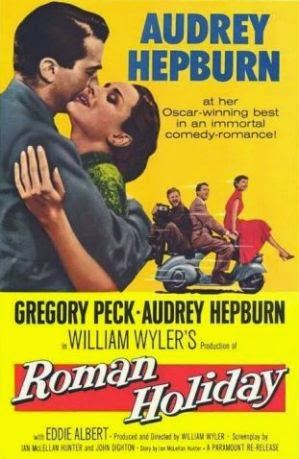