Should the light sabers of Star Wars have hilts?

Should Superman still have red trunks outside his blue suit?

When will George R.R. Martin finish writing those damn books in Game of Thrones?

Shouldn't an actress who is Asian be playing the lead character in Ghost in the Shell instead of Scarlett Johansson?

Should Disney abandon the continuity created by George Lucas when it resumes the Star Wars films?

Is Kanye West's selfish focus upon himself so large that it would create an orbital pull and create its own gravity?

Popular culture seems destined to flood our senses with information, images, spectacle, and lurid event.  It asks questions that we have no answers for, and in the end, our attention is diverted from real news.  Whether we need to escape, or whether we choose escapism to avoid reality because it is easier to escape, many people in Western civilization and capitalist society choose to ignore the events outside of their reach, so much that they are ignorant to the world around them.

Many have not heard of, and if they've heard of, they do not care about:

There are a number of issues that aren't agreed upon by people enough to act upon them*, but in the cases listed above, people are dying, and there are clear cut aggressors or enemies.  The people involved know the issues are important, but those who focus entirely upon pop culture often have no idea what is going on.

*Some of the issues where there is debate...

Are humans causing the current phase of Global Warming?

Is the Death Penalty cruel and unusual punishment?

Should Immigration standards allow people to come into the United States or the countries of the European Union from considerably less wealthy countries seeking financial benefit?

There are many more issues without cohesive answers, but many feel the need to solve the problems in pop culture before we assess and solve the hard issues in reality.  Why do we elect people and pay taxes, after all, if not to take care of these issues?  Our lives are hard enough, without such worries.

I am being facetious of course, but the truth is, I worry over the future, when people are more sad that an author or actor or character in a movie dies, than 213 people in a battle for a town in Syria.  But it does happen.  Every single day. 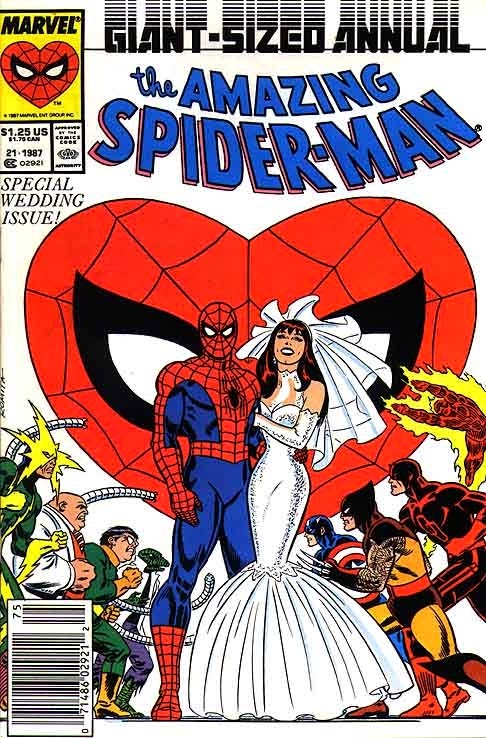 A couple years ago, a lot of DC fans were outraged when J.H. Williams and W. Haden Blackman, the creative team behind the popular BATWOMAN comic, were leaving the book because of editorial differences.  BATWOMAN was notable for having an openly gay heroine and her relationship with police officer Maggie Sawyer, formerly a supporting character from SUPERMAN, was a big part of the series.  Williams and Blackman had planned to have Batwoman and Maggie get married, but at the last minute, the editors at DC decided they would not permit it.

DC insisted that they have nothing against gays or gay characters, Co-publisher Dan Dido explained it this way:

Tim Drake, Barbara Gordon, and Kathy Kane — it’s wonderful that they try to establish personal lives, but it’s also just as important that they put it aside as they know what they are accomplishing as the hero takes precedence over everything else. That is our mandate, that is our edict, that is our stand with our characters."

In other words, it isn’t that DC has a problem with Gay Marriage, but that DC has a problem with Marriage, Period.  Superman is allowed to date Wonder Woman in the New 52; and Batman can do the nasty on a rooftop with Catwoman; and Starfire, hoo-boy, Starfire; who can keep track? – but being a super-hero means that the job comes first and no other commitments are allowed.

You might argue that comics are chiefly written for an adolescent male audience which isn’t really interested in Domestic Bliss.  A big part of Superman’s original premise was the fantasy of “If only that girl I like knew that under my mild-mannered exterior I’m special”. In order to keep that character dynamic, Lois Lane has to remain clueless, and Clark Kent has to remain single.  Marvel Editor-in-Chief Joe Queseda felt that the core of SPIDER-MAN was the hard-luck hero who could never catch a break and that readers couldn’t identify with Peter Parker as such when Peter happened to be married to a super-model.  He wanted to break up Peter and Mary Jane’s marriage in the worst way; and that was exactly how he did it.

In this school of thought, particularly among comic book editors, that Super-Heroes and Marriage don’t go together;  that fighting crime is a single person’s game; that married people are boring.

But there have been super-heroes who have gotten married and made their marriages work.  Let’s take a look at a few. 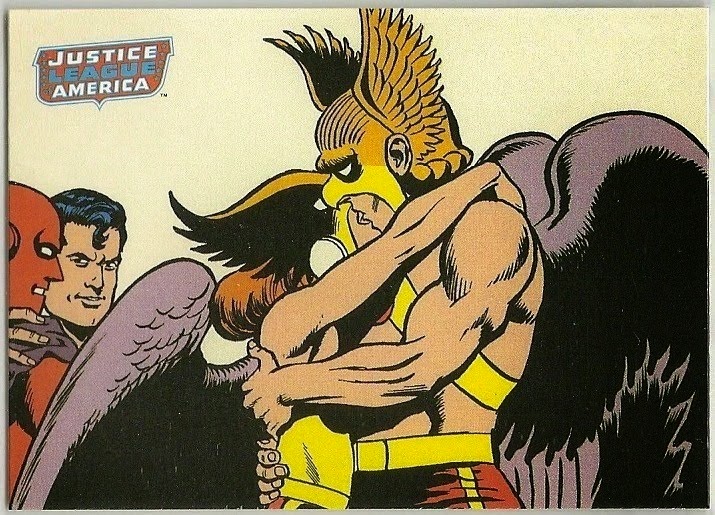 One of the first, if not the first, married couples in the annals of comic book super-heroes was Hawkman and Hawkgirl.  The original Hawkman was Carter Hall, an archaeologist who learned that he was the reincarnation of an Egyptian prince named Khufu.  Carter discovered a material he called “Ninth Metal”, (later re-named “Nth Metal, because it sounded more scientific) with anti-gravity properties which he used to create a pair of wings with which he could fly.  Although most super-heroes followed the precedent set by Supernam of keeping the Secret Identity hidden from the Love Interest, Carter let his girlfriend, Shiera, in on the secret and made a pair of wings for her too so that she could fight crime with him as Hawkgirl.  After all, Shiera was the reincarnation of Khufu’s ancient lover; theirs was a love which had lasted millennia.. And Carter and Shiera also worked together at the museum, so it was only natural that they would fight crime together too.  They married, and became one of the more enduring super-couples of the Golden Age.

At the start of the Silver Age, when editor Julius Schwartz recast and updated several of the old Golden Age heroes, he had writer Gardner Fox, who had created the original Hawkman, to give the character a more science fiction spin.  In the revamp, Hawkgirl wasn’t just Hawkman’s girlfriend, Katar and Shayera Hol were a husband-and-wife team of police officers from the planet Thannagar, who come to Earth in pursuit of a criminal and decide to stick around.

After the CRISIS ON INFINITE EARTHS, Hawkman and Hawkgirl, (or Hawkwoman, as she called herself in later decades),  suffered waves of retcons as DC’s editors and writers tried to fix the inconsistencies created by each preceding fix.  As a result, by the ‘90s they found it easier to just separate the two characters rather than deal with them as a team. 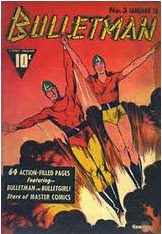 BULLETMAN, published by Fawcett Comics, also featured a husband and wife team of crime-fighters.  Police ballistics expert Jim Barr invented a serum giving him enhanced strength and intelligence, and a bullet-shaped helmet which gave him control over gravity enabling him to deflect bullets and fly.  Like Carter Hall, he shared his discovery with his girlfriend, Susan Kent, so that they could fight crime together as Bulletman and Bulletgirl; and like the Hawks, the two eventually married.  Although fairly obscure today, Bulletman was for a time Fawcett’s second most popular character, next to Captain Marvel.

Another Golden Age character, even more obscure but worth mentioning, was Quality Comics’ DOLL MAN, a guy who could shrink down to six inches in height.  Like many other characters published by Quality during the Golden Age, Doll Man was acquired by DC Comics in the ‘70s and put in a group called the Freedom Fighters; but has been little used.  Still, he also is significant in that he went against the unwritten rule that Super-Heroes mustn’t let their loved ones know what they do in their off-hours.  Darrel Dane began his career by using his shrinking formula to save his girlfriend, Martha Roberts from kidnappers.  Martha makes his costume for him, and eventually gains shrinking powers herself so that she can join him as Doll Girl. 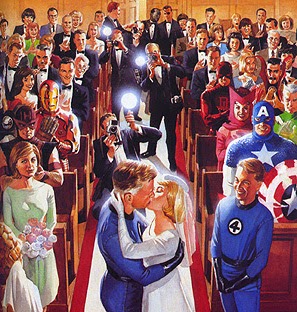 Early on in the FANTASTIC FOUR’s run, Reed Richard and Sue Storm tied the knot in a ceremony attended by many of the big names in Marvel Comics; (although not Stan Lee and Jack Kirby; as an in-joke they were shown being thrown out of the building as gate-crashers).  For the most part, their marriage has been a solid and stable one, and they are raising two fantastic children.

Other heroes of the Marvel Universe have gotten married as well.  Hank “Ant-Man” Pym and Janet “Wasp” Van Dyne have had a rocky relationship, buffeted chiefly by Hank’s emotional problems.  For a while, Scarlet Witch was married to her fellow Avenger, the Vision, and had to face a lot of prejudice, not, for a change, because Wanda is a mutant, but because the Vision is an android.  And then they had kids.  Um… how did that work?  John Byrne later explained it by saying that their twins were figments of Wanda’s imagination given physical substance by her powers… somehow.  Which makes sense, I guess. 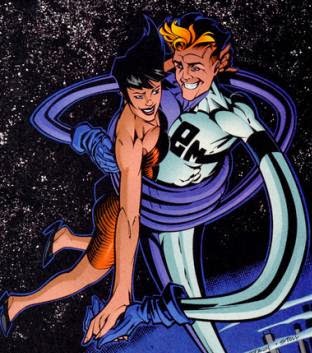 I think the happiest marriage in all of comics, though would be that of Ralph and Sue Dibney.  Ralph, “The Elongated Man”, was a stretchable sleuth with a “nose for mystery”, who would travel around the world with his wealthy wife, solving baffling cases in eight pages or less as a back-up feature in THE FLASH.  Their relationship was modeled after Nick and Nora Charles from “The Thin Man” movies, (minus the copious amounts of alcohol William Powell and Myrna Loy seemed to drink in the films); united in a love for solving puzzles and for each other.  Every year, Sue would create a special mystery as a birthday present for her husband to solve.  For a while, Ralph was a member of the JUSTICE LEAGUE OF AMERICA by himself, but when he rejoined the team in JUSTICE LEAGUE INTERNATIONAL, he brought Sue with him and she became a valuable supporting character.  And dang it, they were so cute together.  Sadly, Sue was killed off in the IDENTITY CRISIS miniseries in order to provide the heroes with a nice tragic beginning..  Because nothing happy can last, I guess.

In “Anna Karenina”, Leo Tolstoy said that “Happy families are all alike, every unhappy family is unhappy in its own way.” Perhaps this is why comic writers are uncomfortable writing stable relationships and would rather give their heroes messy love-lives.  Which is a shame, because I don’t think it has to be that way.
Posted by kurt wilcken at 8:17 AM 1 comment: