The Return of CHUCK 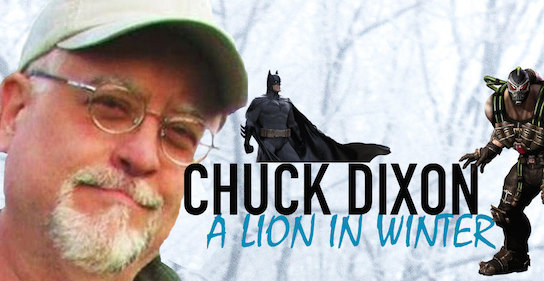 The fans of Bane, artist Graham Nolan and writer Chuck Dixon were surprised to learn that there is coming soon a 12 issue series telling the new chapter of BANE.  It is called BANE: Conquest and I spoke to Chuck Dixon about the news. 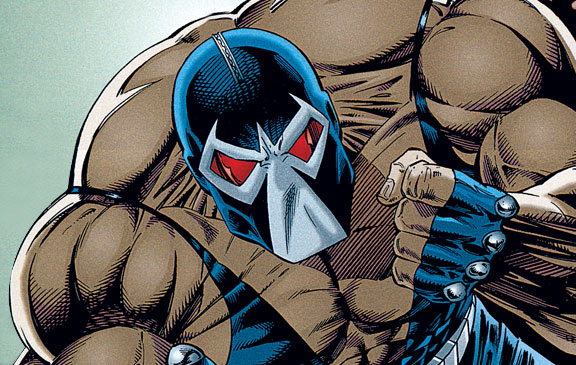 At the heart of him, who is Bane?  Is he evil, misguided, or mentally ill?

He's more nurture than nature. If you can call growing up in a vicious third world prison anything like nurturing. Like Bruce Wayne, Bane is a self-made man. In fact, self made in a far more unforgiving environment. And we have to remember that Bane, at his heart, is a wrongly punished innocent. A lot of his reactions to his crappy upbringing is revenge for being abandoned. 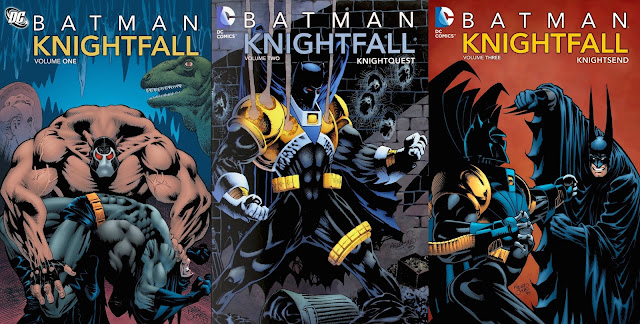 With a character able to grow and shrink according to the drugs going through his veins, is it most essential to have a certain kind of artist?  If so, what kind?

A good one. In the case of Graham Nolan, a great one. Bane doesn't so much Hulk-up as pump up. It has to look believable, not a supernatural or sci-fi kind of transformation.

When writing Bane stories, as he is your creation along with Graham, do you feel that you have a proprietary interest in his development?  If so, what do you do differently?

We absolutely feel closer to the character than any other creator who's worked with him. Graham and I share a vision for Bane that Knightfall was only the beginning of. We've always had an epic arc for him in mind. Bane: Conquest is the next chapter in that story.

How true does Bane ring in this era of Steroid addled sports heroes and WWE people?

I think he's very believable. We've seen him off his fix and the results are tragic. We'll see more of the negative affects of his addiction in this new series. 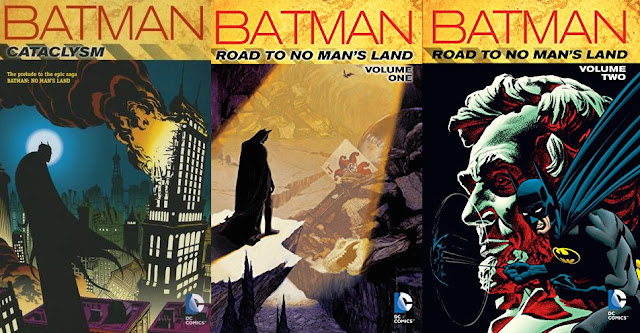 Tell about this new Bane story?  Will it lead to more of the same? I hope so.

Me too!  The series concerns bane's expansion as a player on the world stage of crime. Gotham is too confining. His disastrous association with Ra's Al Ghul has left him with a desire to expand his reach; take his ambitions global. OF course, that leads to complications, betrayals and lots and lots of violence. It's a classic gangster story.

Of all of Batman's enemies, who is the hardest to write?  Why?

The Riddler. Those damned riddles. To write a classic Riddler story takes a lot of time.

OK, Riddler tough, got it.  What villain outside of Bane do you feel is the easiest to write?

For me, Catwoman has always been fun to write. I think it's because she actually likes her self and enjoys life. That's so rare in a modern comic book character. 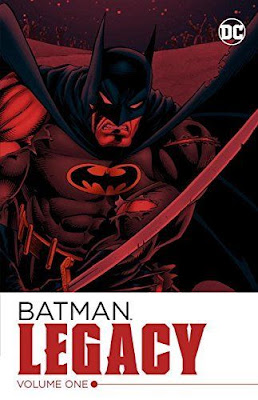 Since writing comics is similar to writing plays or for film, do you have unwritten but planned out stories for the other media?

I'm a dedicated comic book writer. I never saw it as a stepping stone to some other medium. In recent years though I've turned to writing novels as well as doing some work in electronic gaming.

If given carte blanche to take 2 years on any given character, which would be the most rewarding for you?  Nightwing? Batman?  Superman?

I'd like a crack at a run on Superman. But he's in such good hands now with the return of Dan Jurgens.

How long from ruminations/start to finished work/end does it take you for a typical script?

Typically I can easily finish a full script in four days. Ruminating is my constant state so I can't really gauge that time. The scripts that take longer are the ones that have to be funny. A SpongeBob script can take much longer as it also needs to be honed down to only what moves the story along.

Who is your favorite Batman writer outside of your prestigious being?

Bill Finger was king. Denny O'Neil saved Batman for future generations, of course. And I really like Frank Robbins' writing after he picked up on what Denny was doing with the character.

When writing the Batman what do you do differently that others, making your work memorable?  Is it your take on the character, his setting, his secondary characters?

I'm not good at examining my own work. But I think my use of humor (sardonic or dark) is something I don;t see many other writers using. A lot of Batman stories I see are unrelentingly grim. For me, there's plenty of room for humor (NOT comedy) that does not mock or deconstruct the character.

BANE: CONQUEST #1, written by Chuck Dixon with art and cover by
Graham Nolan and colors by Gregory Wright, hits shelves May 3rd. 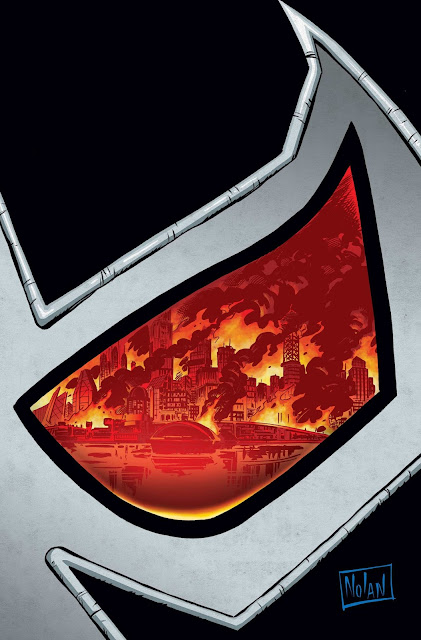 Posted by alex-ness at 7:07 PM No comments: Links to this post

The Legion of Substitute Bat-Men 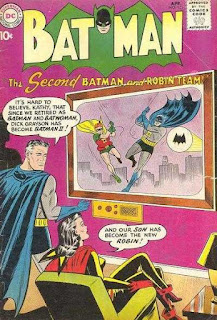 Everybody knows that Batman is secretly millionaire Bruce Wayne. But who defends Gotham City when Bruce is out of town? Or suffering from a broken leg? Or when someday he just gets too old to sling a batarang?

Then it's time to call out the Substitute Bat-Men.

Superman and Batman have long had a kind of informal mutual aid pact where they would cover for each others Secret Identities. This goes back to the their very first meeting back in 1952. Clark Kent and Bruce Wayne happen to be on a cruise ship and wind up sharing the same cabin. When a crisis occurs on board, both heroes duck into their room to change into their costumes, but in the darkness they inadvertently don each others suit. And no, that doesn't make a whole lot of sense; but it does give them the opportunity to play some mind games on Lois.

There is an episode of SUPERMAN, THE ANIMATED SERIES in which the Man of Steel fills in for the Dark Knight. In “Knight Time”, Superman learns that Batman seems to have vanished and that the criminals of Gotham have been going wild. Robin has been left to man the fort as well as he can, and is frankly overwhelmed; so Supes agrees to put on the Bat-suit and help out. It turns out in the end that Superman's enemy, Brainiac has kidnapped Bruce Wayne; (it didn't involve Batman at all; Brainiac need Bruce for something); but the highlight of the episode came when Superman, disguised as Batman, raids a meeting of villains. Bane tries to beat the snot out of Batman and is dismayed to find him unexpected invulnerable.

In another memorable scene, Superman-as-Batman has a meeting with Commissioner Gordon. Superman is able to mimic Batman's voice perfectly; but he stands ramrod-straight with his jaw and chest protruding forward like a soldier at attention. Gordon looks at him curiously; he can tell something about him is off, but can't seem to put his finger on what it is; while Robin cringes at how un-Bat-like the performance is. Leave it to animators to think of how Batman and Superman differ in terms of body language.

During the the '90s there was an extended storyline in which Bruce Wayne was forced to relinquish his cape and cowl because he had his spine broken by the villain Bane. Instead of naming Dick Grayson as his replacement – the obvious choice – he selects a young man calling himself Azrael; a former member of a wacko religious order who has trained to be a holy assassin and is obsessed with vanquishing evil. Incredibly enough, this goes badly. For one thing, Az-bats, (as the fans took to calling him), adopted a suit of armor covered with blades and pointy things making him look like an ambulatory cheese-grater. More importantly, Azrael becomes increasingly violent and delusional and ultimately Bruce has to get off his butt, get his spine repaired and go through some extreme rehab to reclaim his cowl.

Dick Grayson, the original Robin and current Nightwing, does take over as Batman in a storyline from a few years ago in which Batman gets zapped by Darkseid and is presumed to be disintegrated. He actually has merely been displaced in Time, but until he get make his way back to the present day, Dick has to fill in for him. This storyline touches on the differences between Dick and Bruce and they way they approach crime-fighting. Although the Batman's mission remains the same, Dick has a different style. In addition to taking on Batman's job, Dick also has to prove himself to those who realize that he's not the “real Batman”. And he also has his hands full trying to mentor Damien, the son Bruce never knew he had, who showed up shortly before Bruce's disappearance.

Mention of the Son of Batman brings to mind “The Second Batman and Robin”, a classic Imaginary Story from the golden age. It tells how As Bruce Wayne gets older, he passes on the torch to the now grown-up Dick Grayson. Bruce is married now to Kathy Kane, the former Batwoman; and their son, Bruce Wayne Jr., becomes the new Robin. Both of these new incarnations wear a Roman numeral “II” on their costumes, to differentiate themselves from the originals. At the end of the tale, we learn that this whole story has been a fanfic written by Alfred, the Wayne's faithful butler. He knows he can never publish it – his story has too many secrets of the Wayne Family in it – but thought it would be fun to speculate what the future might bring. He muses that he just might write a sequel someday; and he does.

The animated series BATMAN BEYOND also plays with the idea of who would be the Batman when Bruce gets to be too old for the job. In this case his successor is Terry McGinnis, an angry youth with a strong sense of justice, who discovers the entrance to the Batcave in the home of that cranky old billionaire recluse who lives on the edge of town. He uses some of Batman's tech to try to bring his father's murderer to justice, and Old Bruce becomes his grudging mentor.

The clash between the impulsive Terry and the bitter, hardened Bruce forms the central chemistry of the series, brought out most memorably for me in the direct-to-video movie BATMAN BEYOND: RETURN OF THE JOKER. Although the Joker has been dead for years, it is revealed that he had created a digital copy of his personality which becomes activated. In the final battle, Joker 2.0 mocks Terry as an Imitation Batman. Old Bruce warns Terry not to let the Joker goad him into conversation; the Joker just wants to rattle him. But Terry wonders, why not? He is not Bruce. He has a different personality and a different style. So he taunts the Joker back; something the original Batman would never do; and finds that, like the Devil, Joker cannot abide being mocked. Terry is able to rattle the Joker and get the better of him.


One theme that comes up in almost every one of these stories is the Gotham City needs a Batman. And so, one way or another, it gets one.

ADDENDUM:  When I originally wrote this piece, I was writing largely from memory and neglected to double-check a couple things.  In the story where Bruce Wayne and Clark Kent met on a cruise ship, they did not accidentally put on each other's costumes; they just discovered each other's secret identities.  But they did switch places with each other to play mind games on Lois.
Posted by kurt wilcken at 12:34 AM No comments: Links to this post