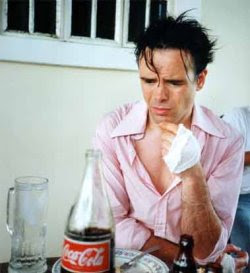 Artists think and feel differently. I do not know if it is from their spirit, mind, desires, physical body, ... but they do. They are different. 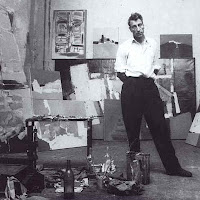 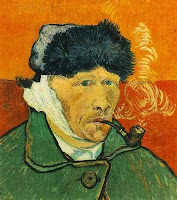 Sebastian Horsley killed himself. His work was in some ways of thinking a journal of a very long painful suicide. Included amongst his work of self expression was his desire and indeed decision to be crucified to experience the moment. 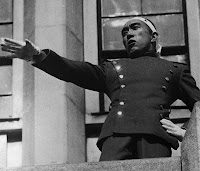 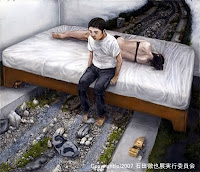 So many artists also have killed themselves. Some as the logical end to a life of depression and sorrow. Others, seemingly, as a punctuation mark to their work. The artist mind and spirit, to reflect and create is different than other humans. But I am not decided as to whether I believe their desire to and likelihood of use of suicide is more likely than any other kind of human.

We all have our own baggage and issues to deal with. I am not saying anything about should do, or not do. This is simply a reflection. 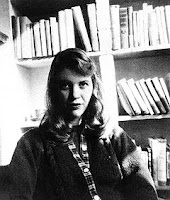 Posted by alex-ness at 4:43 PM 2 comments: Links to this post 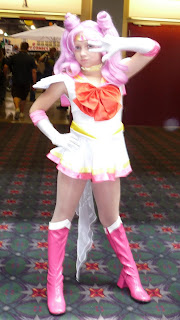 There was a dramatic change in tone at this year’s Wizard World Philadelphia. As is the case with many conventions, there had always been a strong multimedia component, but this year, the comic book end of the entertainment spectrum was severely curtailed. I don’t know whether it’s the economy or just competition from other venues, but neither of the Big Two had a presence at Wizard World.

Instead, there was a vastly expanded pool of celebrities for autographs, photos and Q&A. There were the usual pro wrestlers and aging Playboy bunnies, but there was also some serious geek cred. Patrick Stewart was there, surrounded by photographers. Every minute he was in his booth, the autograph line snaked around the room. Funny how Brent Spiner, Walter Koenig and Avery Brooks never had more than a few people waiting to talk to them. At one point they were advertising William Shatner as a guest, but I guess that fell through. I suspect having two Enterprise Captains in the same building would cause a collapse of the time/space continuum. Still, it was a Trekkie paradise. Even the guy who played the Gorn was there! 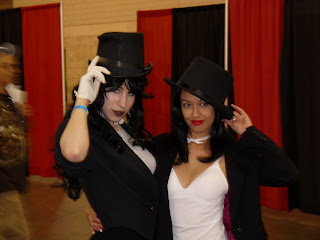 I’m a comic book geek, and I was there to talk to comic book people. There were no people from DC or Marvel editorial dishing dirt on upcoming projects, and there were no veterans from the old days telling stories about what jerks Murray Boltinoff and Martin Goodman were, but there were a couple of panels. I skipped the artist panels, but I did go to Raven Gregory’s panel on how to break in as a comics writer. The truth, as he immediately acknowledged, is that every writer has their own story of how they broke in, and there’s no One True Path. He shared his own story, and answered questions. 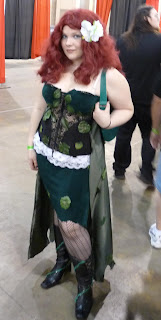 One of the first people to step to the mike to ask a question happened to be wearing a Mario Brothers shirt.

Gregory interrupted him to observe that it seemed like he should be speaking in a higher pitch, to match his shirt. The fan complied, throwing in an Italian accent for good measure. This is why I go to conventions, and this is why I went to this panel, despite having never heard of Raven Gregory or read any of his books. We geeks can make fun out of nothing, on demand. Subsequent questions were asked in a robot voice, a baby voice, as Popeye and Scooby Doo, and on and on until the panel ended. Gregory requested a voice, and most of the fans did their best to comply. I bet the fans at the Patrick Stewart Q&A didn’t have half as much fun!
Sadly, I had a family emergency at home, and couldn’t spend as much time at the Con as I’d have liked. I did a little shopping, talked to fans, cruised Artist’s Alley for new talent, and took pictures of as many people in costumes as I could. Abbreviated Con is still better than no Con at all! 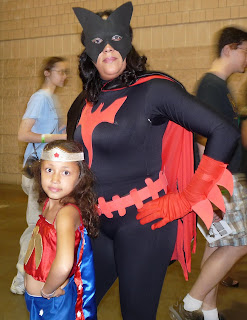 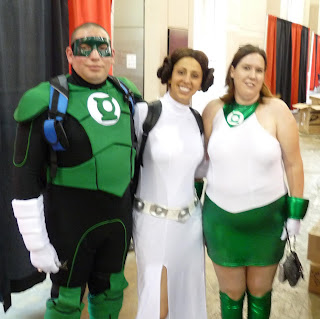 One last thing I should point out, before I turn this over to all-picture format. I took lots of pictures of people in costumes, and cosplay is a big part of the Con experience for some. However, civilians should keep in mind that only a tiny fraction of attendees were in costume. If you talk to someone who goes to Cons, don’t ask who they dressed up as. Odds are, they dressed as themselves.
That includes me. Sad to say, I’m getting older, and can no longer fit into my thigh-high spike-heeled boots. And since I got my hair cut, the gold tiara just looks silly. 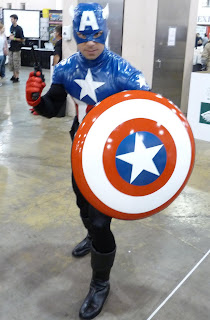 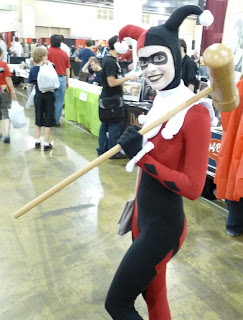 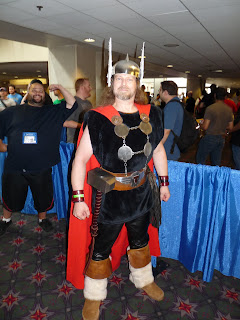 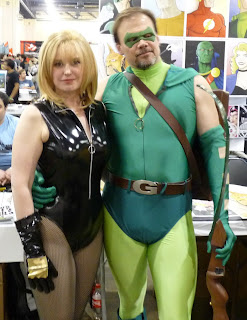 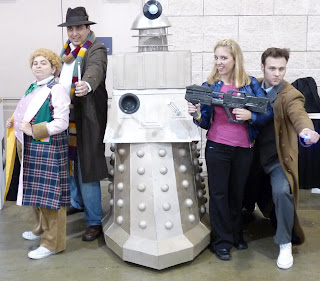 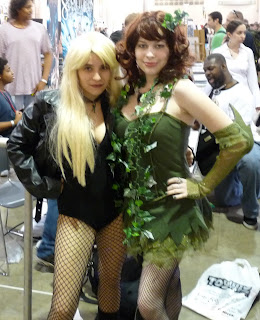 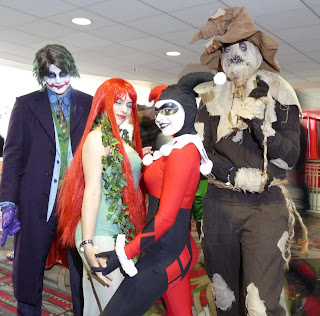 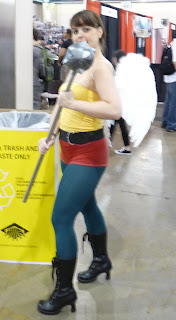 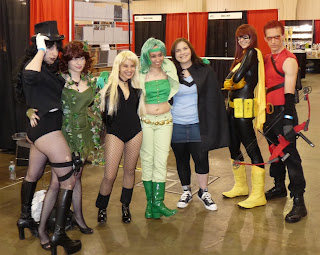 Posted by Rich Chapell at 7:02 PM 2 comments: Links to this post

If you haven't been following it, why not?

In the Futuristic World of 1935, Hannibal Tesla Man of Science, travels the world fighting evil along with his team of Able Assistants:

Investigating a robbery at a museum, Hannibal crosses paths with a criminal mastermind named Weng Hu. Now Hannibal is racing Weng Hu to Tibet, to find an ancient jewel which may be an alien artifact of incredible power! Will Hannibal beat Weng Hu? What is the secret behind his Sky Terror? And why does Ginger have a tail?

For the answers to these and other thrilling questions, go to Hannibal Tesla Adventure Magazine
Posted by kurt wilcken at 3:26 PM No comments: Links to this post

It could have all turned out so differently

The world is outraged by the oil spill in the Gulf of Mexico. As environmental disasters go it is somewhat huge.

People talk right now how Israel is bad oh so bad for killing nine people from a convoy meant to break the Israeli blockade of Gaza.

People talk about North Korea's nuclear aspirations and sinking of a South Korean ship near their territorial waters.

People think that Obama is a National Socialist.

People can talk or think all they like. We might well have ended up in far worse place had courage, luck, and determination to defeat evil not occurred. North Korea with three nuclear weapons? How about a Hitler's Germany with not only nuclear weapons but orbital space weaponry?

The younger we are the more it seems to be that we forget what happened before, that allowed us the luxury of being outraged at 9 deaths.

Here are some books to read to give a thought to a different outcome, and, a different future. Tomorrow is June 6, 66 years after the Allies began the final drive towards defeating Racist Nationalism in Germany. God bless all who died there, who bought my freedom through their sacrifices.

In addition to different outcomes from war, imagine the environmental disaster that could have come, from a world possessing nuclear weapons and being willing to fight a war to end all grievances, using them. The oil in the Gulf of Mexico today would seem a pittance compared to the devastation of the nuclear consequences of the war that didn't happen.

This world inherited its enlightenment from the past, where people made choices to fight what appeared to be evil. And I thank God they did.