The Heroes of Dakota 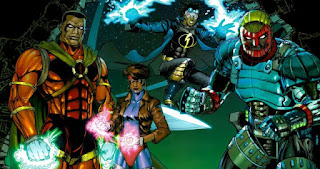 Of the flurry of aspiring comics companies created in IMAGE's image during the 1990s, I think the most interesting was an outfit called Milestone Media. It was established by a group of black creators who wanted to form a more racially-diverse comic book universe. Although the Milestone line of comics only lasted a couple years, the characters which came out of them have been far more enduring.


Unlike the other start-up comic book universes of that era, Milestone did not set itself up as a challenger to the Big Two comic book companies. Instead, they set up an agreement where Milestone existed as an imprint of DC Comic, distributed by DC but separate from the DC Universe. Milestone Media retained all rights to their characters and creative control over their books. This was an unprecedented arrangement at the time.

The books were based in Dakota, a large city located presumably somewhere in the Midwest. For that reason, the Milestone Universe has sometimes been called “The Dakotaverse”. The company started out with four core titles, and a bang. A Big Bang, to be specific.

The biggest street gangs in the city were gathering for one ginormous fight. The cops got word of the event and planned to raid the rumble and round up every gang-banger in the city. To do this, they used an experimental riot control gas provided by a local industrialist, which, this being a comic book, had unforseen results, killing many of the victims outright and mutating some of the survivors.

Many of the principal characters in the Dakotaverse were “Bang Babies”, survivors of “The Big Bang”; and all of the characters were affected by it in some way. Most significantly were the characters of BLOOD SYNDICATE. They were members of various opposing gangs, who had become warped by the mutagenic gas. Before the Big Bang, they were deadly enemies, from different neighborhoods and different ethnic groups. The only thing they have in common is that now they're mutated freaks, and they need each other to survive.

I never read BLOOD SYNDICATE; it did not particularly appeal to me; but it was easily the grittiest and most “street-level” of the Milestone core titles.

At the other end of the economic spectrum, we have HARDWARE. Curtis Metcalf is a brilliant engineer working for Alva Industries. He has a nice home, a large salary, and his own personal lab. Metcalf owns a pet canary that he lets fly loose in his apartment. But when it does, it beats its wings against the windows. As far as the bird is concerned, it's still in a cage; just a slightly larger one. Metcalf comes to realize that his own situation is not that different: his cushy job with Alva is just another cage and he's nothing but a wage slave.

He's made millions for Edwin Alva, but gets no credit for his inventions, and no share of the profits. He can't even look for another job in his field because of a non-competition clause in the fine print of his contract. Metcalf learns that Alva has numerous criminal, or at least sleazy operations growing out of his legitimate business. It was Alva who provided the experimental riot gas used the night of the Big Bang. But because of his connections and power, Alva is virtually untouchable by the law.

So Metcalf works subversively within the system. He pilfers Alva Industry resources to build a suit of powered armor, and as Hardware, strikes against his boss by attacking Alva's criminal enterprises.

The best-known of the Milestone titles is STATIC, which enjoyed a second life as an animated series after the comics line ended. Virgil Hawkins is a bright but geeky high school student with the normal problems of adolescence: awkwardness with girls, annoying family members, trouble with a bully, and pressure to join a street gang. It's because of the last that he finds himself in the wrong place the night of the Big Bang. The mutagenic riot gas gives him the power to wield powerful electric blasts and to “fly” by riding on pieces of metal (originally a garbage can lid) that he levitates using electromagnetic force. Virgil is a wise-cracking hero in the Peter Parker mold.

Each of the main Milestone titles could with some justification be called black versions of iconic comic book superheros. BLOOD SYNDICATE was X-MEN, re-imagined as a street gang; HARDWARE was IRON MAN; and STATIC was SPIDER-MAN. What might be regarded as Milestone's flagship title, ICON, made no attempt to disguise the fact that it was, essentially, SUPERMAN; but like the other titles, it was Superman with a twist.

An alien being crash-lands on Earth. In order to protect him, his survival pod reconfigures his appearance to resemble the first native he encounters. Which happens to be a black slave in the antebellum South. He is raised as a slave and keeps his extra-human powers a secret, biding his time and waiting for earth technology to progress to the point where he can repair his spaceship. A century and a half later, he has come Up From Slavery and is now a successful lawyer in Dakota, calling himself Augustus Freeman IV. He still keeps his powers hidden, until a teenage girl named Raquel Ervin learns his secret and persuades him to use those powers to the benefit of society as a super-hero.

The dynamic between these to characters, Icon and Rocket, is what I find most interesting about this comic: the older, conservative Freeman and his outspoken, radical sidekick. I've read one critic sniff that Icon is a liberal's idea of what a black Republican is like, but that's only a superficial reading. The writer, Dwayne McDuffy, said that in the two characters he was trying to reflect a dialogue that has been going on in the black community about civil rights for over a century. Early civil rights pioneer Booker T. Washington emphasized education and hard work as the path for blacks to earn respect in society. His rival, W.E.B. DuBois insisted that blacks would not gain equality with whites unless they fought for it. Washington was the safe face of black civil rights, the one whites felt more comfortable with and the first black man invited to the White House for any reason other than to say “Dinner is served.” DuBois was the dangerous radical who criticized capitalism and embraced socialist causes. Several decades later, these differing philosophies were embodied by Martin Luther King and Malcolm X.

Augustus Freeman has good reason to be a Republican. After all, it is the Party of Lincoln, and since he was alive when Lincoln emancipated the slaves, to him that counts for a lot. And perhaps more relevantly, having worked his way from being a slave to becoming an affluent lawyer, he has little sympathy for poor blacks who remain in poverty. To which Raquel replies that it's easier to pull yourself up by your bootstraps when you can fly.

Yes, the writing showed a discernible political bias, but Icon never seemed to me like a Strawman Conservative to be punctured by the Good Gal Liberal. I felt his character was treated with respect with a legitimate point of view. Much as Steve Ditko tried to do with his HAWK & DOVE and Denny O'Neil attempted with his use of Hawkman and Green Arrow in JUSTICE LEAGUE OF AMERICA, in ICON the conversation between the two was more important that scoring which side wins.

Milestone's comics line lasted for a few years; longer than some other independent comics lines of the same era; and added a few more titles, most notably XOMBI and SHADOW CABINET. It was widely-perceived as a “blacks only” line of comics which limited its sales. Even a big cross-over event with the mainstream DC Universe, WORLDS COLLIDE, didn't help.

But although the comics line faded, Milestone and its characters remained. Some years later, STATIC was adaped into a successful Saturday Morning cartoon which lasted four seasons, and the character made appearances in the animated DCU in the JUSTICE LEAGUE UNLIMITED cartoon. More recently, Milestone and DC made a new agreement to fold the Dakotaverse into the DCU. With the subsequent re-shattering of the universe with the “New 52”, the Milestone world is its own alternate earth, designated “Earth-M”, and there are plans for new stories set in Dakota. The echoes of the Big Bang reverberate still.
Posted by kurt wilcken at 10:47 AM