BACK ISSUES TO PURSUE: DYSTOPIA, UTOPIA, GUNS, AND REBELS

From a reader:  "Dear Mister Ness, I read your no capes article, and love comics and love superheroes, but was amazed by all the comics I never heard of before.   And when you did a follow up article with fantasy comics and lead characters who were female, well, I do like superheroes but outside of them I don't like fantasy, I like sci fi, with dark futures, or optimism.  Are there comics about the future or sci fi, and while I am a girl, (18) I don't need a female lead, just interested in stuff that I am interested in.  Also, I've read the whole blog, do you do everything yourself?  I saw quite a few entries by other people, but the last couple three years it seems to be just you and Mister Wilcken."

Thank you for reading this blog.  I will answer the last question first. Right now it is mostly me, with some valued, wonderful Kurt Wilcken entries as time permits.  He, in fact, kept this blog alive when cancer prevented me from doing much.  This blog was the inheritor from the site PopThought, which I began, and gathered a talented set of writers to contribute.  We were hacked by hackers from mainland China, and the data was so corrupted it was no longer viable or worth the time to keep running, due to loss of data, spoiled work, and lack of access during the hack event. It was heartbreaking.

When you say you love comics, I do too.  When you say you love superheroes, I am not so much there, as, they can be great, but I need a broad offering of stories, costumes and capes have only so much diversity of offerings.  But I might suggest that I like SciFi and Post Apocalyptic world comics more than anything.  But any time you create a list, you slap yourself on the forehead and say, shit, I forgot to include ...  So this piece will be an offering, but does not presume to be comprehensive.

(Presented in no order, and click on any image to enlargen it.) 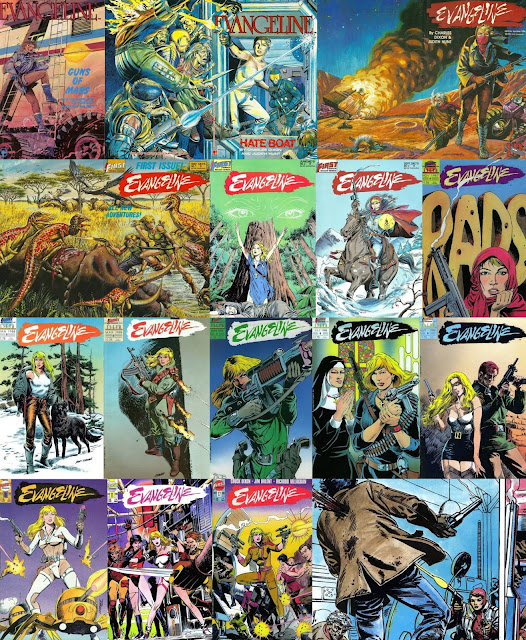 The 23rd century is a collective disaster, with dystopic governance, genetic reawakening of dinosaurs and monsters, and corporate power that goes beyond nations, beyond populations, but are global or beyond.  Evangeline is a vigilante nun with a gun who serves a mentor, Cardinal Szn, who serves his greater master, the Roman Curia/Vatican.  Various different groups hold power, but nations seem to have been wiped out in the mass events that changed the present of our world, into one where bounty hunting, spreading religious zeal for corporate masters, and life in a degraded world is difficult for almost all, but the very powerful. 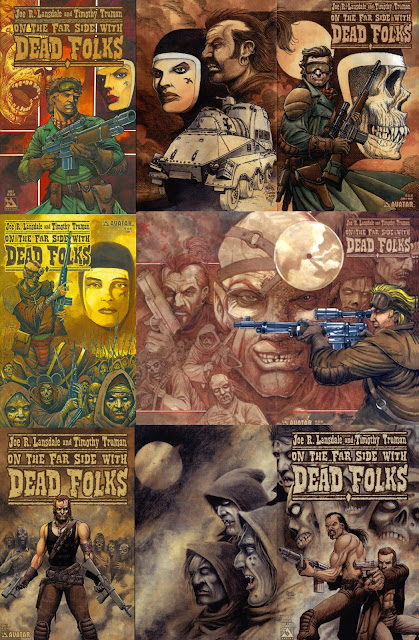 Bounty hunters and religious cults fill a desert and wasteland landscape.  A bacteria either creates new or reanimates the newly dead into zombies.  Wayne the Bounty hunter finds out that Cult leader Brother Lazarus has more than just words and followers.  It is almost impossible to escape but an alliance with Sister Worth leads to new revelations. 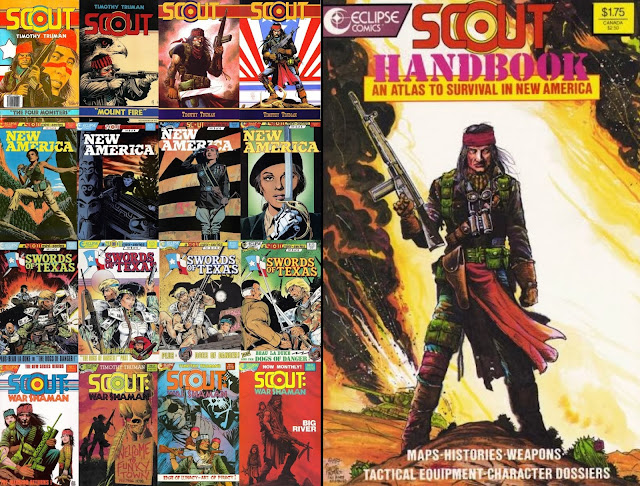 The world has suffered enormous disaster, and the rest of the civilized world has aimed its ire at the United States.  Canada and Mexico are enemies of the now divided US.  A former special forces member, Emanuel Santana, is known now as Scout.  He is Apache and travels the now dying US.  He ends up married, has two children, and they accompany him in the second book of the series, Scout War Shaman. Truman's ability to tell a vivid story is on display here, bringing violence, hope, love and pain all together to scramble the readers expectations.  This work is far more believable now, with the global issues at hand."In October 2016, Chris MacBride is set to adapt and direct for the big screen for Studio8. Truman will serve as a consultant through the development." 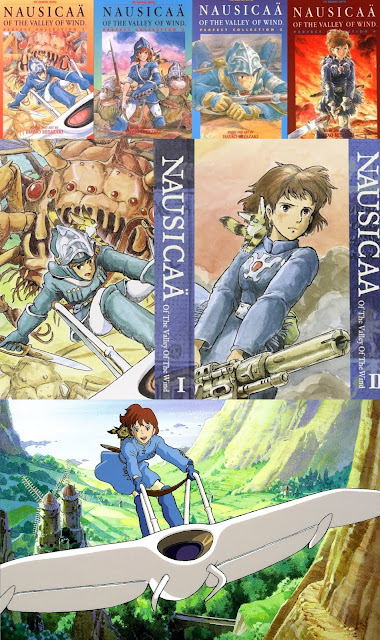 A post nuclear apocalypse world features creatures both enormous and new to earth, an environment that seems to be changing, evolving like a living thing, and a princess of a kingdom that remains green and beautiful, despite the decay of all things.  War and peace are not great motivators, but survival is.  That is, the conflicts are about fighting over things that one side has and the other needs, leading to bitter conflicts, where remnant weapons and artifacts of the past provide secret sources of power. 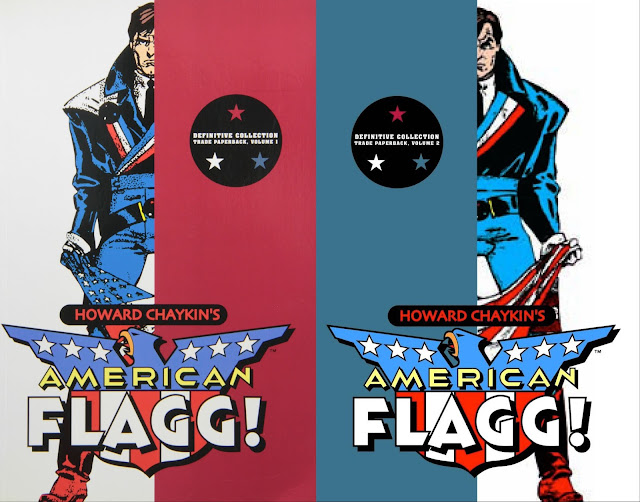 AD 2031 America is now relocated upon Mars.  Humans on earth have created a dystopia, where there is amazing technology, but almost entirely vapid, empty society devoted to materialism where nothing moral or spiritual remains. The former America is governed by the Plex, which is a corporation, at the same time as a replacement for the what passed for cultural identity.  Reuben Flagg is a deputy officer of what passes for law in Chicago of 2031, and it is a place with crime, corporate power, and deep divisions over things that the future was supposed to be free of. 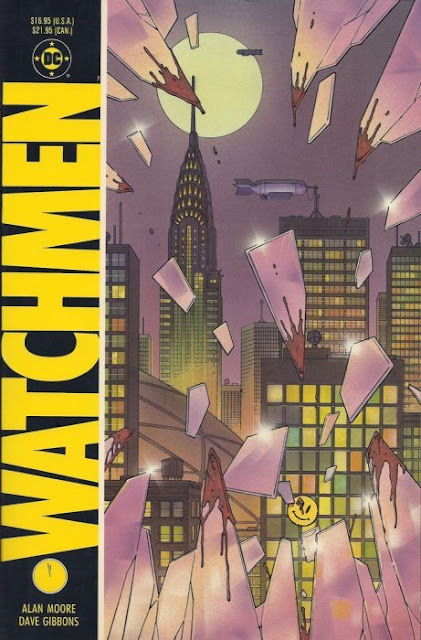 Based upon the Charlton heroes from the 1960s, this series questions what would history be like if there had been beings of great power, vigilantism, and the use of crisis to cause human panic and resort to giving up of liberty in exchange for safety. 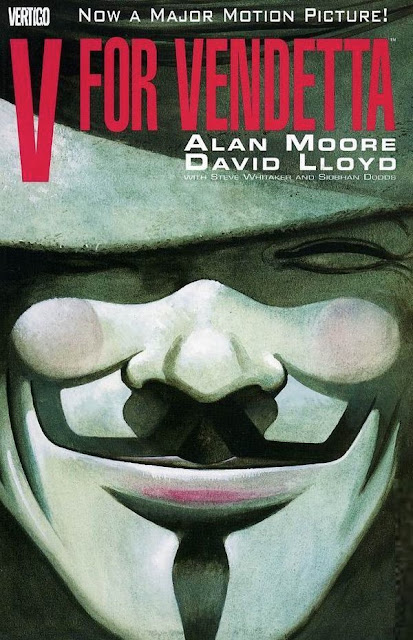 This work features an United Kingdom that has suffered from a nuclear exchange in the past, a Guy Fawkes masked enemy of the corporate state, and a world where the public is manipulated by those seeking power by terror. V FOR VENDETTA offers the question, how do we choose our future, do we trust those who want power, and total power, or do we give up the monolithic structure of government, and take ownership of our own future.

A formerly great society has fallen, and the humans left behind the disaster fight over the remains, as if a race of scorpions, devious, disloyal, and pragmatic to the extent of being without any hope or future thought, save survival.  This is a science fiction world, but the devastation of the world can have happened upon any future earth, if the environment is destroyed.

The sole entry here of a positive future.  The Legion of Superheroes were motivated to create a club, so to speak, of powered teens, who gather to evoke the example of the great hero Superboy from the past.  The society is one where earth is controlled by benevolent police powers, and the troubles the Legion faces come from outside of their own world.  It is mythic, and not gritty, but for those who enjoy optimism in the possibilities of the future, it is refreshing.

Perhaps with roots rising from the 1970s concern for environment, to some extent, nuclear winter was presented as being as possible as a global warming devastated world.  Winter World does not really get at the nut of what exactly happened, or if it were human caused, or if it was naturally occurring.  All we do know is that humans eat anything, fuck anything, use slaves, and the good among the humans are those who do not make things worse, but survival has made all less able to be idealistic, and most simply resort to life = survival, anything else is waste.

Jack Kirby used the concept of Planet of the Apes and human de evolution, whether intentionally, or by evoking similar fears or ideas from similar sources of reference, and created a future event in the DC Comics world.  The Great Disaster, however ill defined by those who live generations since it happened, or for those who live in the near future of days before the Great Disaster, perceive that there used to be a great world, especially in the US, that was far less dangerous, far more idealistic.  Omac became a powerful DNA altered hero to fight the battles against the forces of chaos and corporate destruction of the state.  His grandson, living in the years post Great Disaster is a child born in Command Bunker D, or Kamandi, tries to survive, seeking other humans, but they've regressed into tribes of savages, with almost none having the capacity to think, or communicate with language.

Judge Dredd is a simple concept, magnificently done.  The world has numerous issues, nuclear war among them.  The eastern seaboard of the US is one great megalopolis, and Judges like Judge Dredd have the training, power, and responsibility to manage the human disaster that is over population, chaos, crime, and hunger.  Due to the consequences of living in such an unforgiving place, Judges are prone to become more violent and less abiding or tolerant of law breakers, becoming killers, or they become part of the crime world, and sell their loyalties.  Dredd is untouchable, and never shows his face. He is the common man, the man we would hope to be, if given the violent world he is facing. 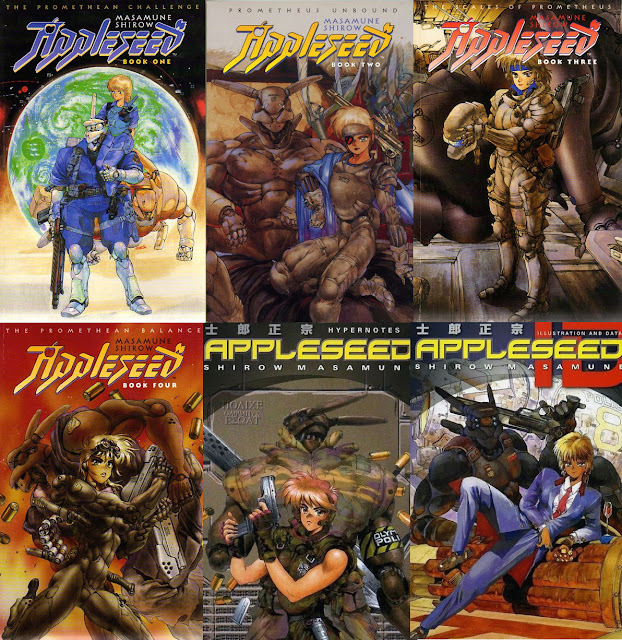 Appleseed was my second Manga love.  I loved Lone Wolf and Cub, but, with Appleseed, whatever my preference for color comics, and western depictions of faces, (no manga or anime big eyes and hair), I was totally moved by the emotional power of it.  It follows the life and survival of ESWAT members Deunan Knute and Briareos Hecatonchires in cybernetic, idealistic city Olympus.  The world around it is in collapse, and the rebels, criminals, and simply the unfortunates try to enter Olympus, or to destroy it, and pose a threat.  The work takes a magnificently deeper look at wealth and technology and even clones posing as something to aspire to, but at the cost of the poor, the dna deevolved, and those who seek power, without sharing it.

Transmetropolitan is a work that follows a journalist working his way though politics, religion, culture, in a future where computers, genetic alteration, and corruption have determined who gets to hold power.  He is a person who lives in the moment, he embraces much of the ugliness of post industrial, post modern society, and asks the question, just exactly why do we choose who leads us, why do we think popularity, however false, should be measured as a means to leadership.

Post Nuclear annihilation Tokyo is populated, in part, by street gangs, powered mutants, and normalcy is being able to eat, live, not be killed for trying simply to survive.  If one person became godlike in powers, would he use that to control and rule, or better others? 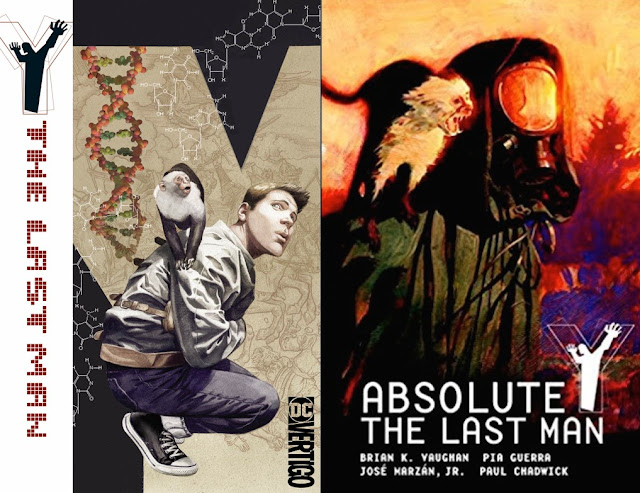 Whether the virus that killed males and corrupting the DNA so that males no longer exist, but for one, was released purposely, or by natural de evolution, the world remaining places women in power, in every strata of society, and asks a question, are women morally better in leadership, what would they do if they were not as Simone deBeauvoir suggest, in the Second Sex, and were to be the ONLY sex.  Do the cultural forces that created old earth society replicate itself in whatever human society, male, female, or neither?  How would the existence of humans be measured if only one male remained to reproduce.  Would that one male even be worthy of being reproduced?
Posted by alex-ness at 12:27 AM