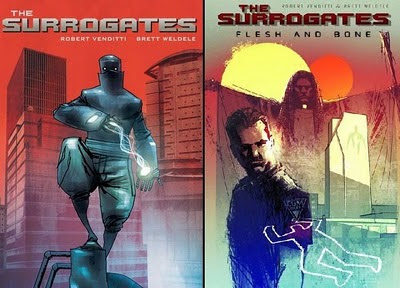 The concept of the graphic novel THE SURROGATES was not necessarily a simple one, but was a very powerful one and a very good one. Humans increasingly seek technology to make their lives simpler. By doing so, the premise considers, we are placing more and more of our life into vicariously lived means. We try to suffer less, we try to work less, we try to have to think less, and by doing so, what is the affect upon the others, ourselves and the world we live in? The world suggested then by Robert Venditti and Brett Weldele is an important one to consider, for as we move further ahead into a technology based, post modernity morality, we become our own arbiters of ethics, morality and Raison d'être. But however well asked the questions the answers are not clear cut. The questions we face are not resolved by avoiding technology, but by understanding its role, and our own agency in existence.

Book One knocked on the door of the future, with a story about murder and false uses of others even when the others aren’t real. Book Two, despite being a prequel was about the world coming to terms with the world we live, versus the world we wish to live.

Both works are beautifully done, beyond my praise ability.

Fans of Bladerunner, Terminator and other future works would dig this.

Book One: THE SURROGATES

The year is 2054, and life is reduced to a data feed. The fusing of virtual reality and cybernetics has ushered in the era of the personal surrogate, android substitutes that let users interact with the world without ever leaving their homes. It's a perfect world, and it's up to Detectives Harvey Greer and Pete Ford of the Metro Police Department to keep it that way. But to do so they’ll need to stop a techno-terrorist bent on returning society to a time when people lived their lives instead of merely experiencing them.

The Surrogates is a story about progress and whether there exists a tipping point at which technological advancement will stop enhancing and start hindering our lives. It is also a commentary on identity, the Western obsession with physical appearance, and the growing trend to use science as a means of providing consumers with beauty on demand.

This volume collects all five issues of the acclaimed comic book series. Packed with bonus content, inside you will find never-before-seen sketches and artwork, as well as commentary from the creative team that brought this breakout story to the page. -- 208-Page, Full-Color Graphic Novel, 6 5/8" x 10 1/8", Diamond: MAY063435

In a dark downtown alley in Central Georgia Metropolis, a juvenile prank goes too far and a homeless man is killed. When the ensuing investigation reveals that the attackers aren't who they appeared to be, justice depends on the testimony of a single witness -- a street snitch with a history of providing information to a uniformed cop named Harvey Greer. Harvey is placed on special assignment to track down the informant, but others have their own designs, including a wealthy socialite and an ex-con turned religious leader known to his followers as The Prophet. As days pass and anger among the anti-surrogate population grows, the city stands on a razor's edge. Will punishment be exacted in a courtroom... or on the streets?

Set fifteen years prior to the events of the first volume, The Surrogates: Flesh and Bone sheds light on the past that binds the cast together. From the streets of Central Georgia Metropolis to the boardroom of Virtual Self, Inc., it takes us on a journey through a city struggling to come to grips with its present. As much a cautionary tale as a story of suspense, this book reminds us that tomorrow will be determined by the choices we make today. -- 144-Page Full-Color Graphic Novel, 6 5/8” x 10 1/8”, Diamond: FEB098170 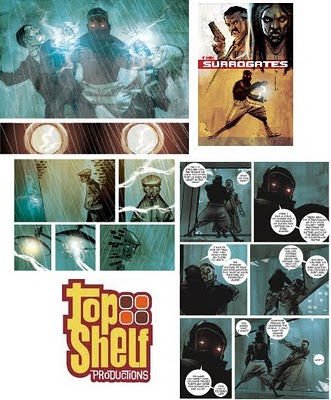 The blockbuster film SURROGATES, based on the Top Shelf graphic novel by Robert Venditti and Brett Weldele, was recently released on DVD and Blu-Ray, and the Blu-Ray contains a 7-minute featurette delving deep into the original graphic novel. In this preview clip, you'll see interviews with both Rob and Brett, plus some amazing animated graphics that bring Brett's outstanding art to life in "motion comic" form. Both DVD and Blu-Ray are available at amazon.com, but the Blu-Ray is the one you want. Don't miss it!

Preview of the featurette:
http://www.topshelfcomix.com/news/508 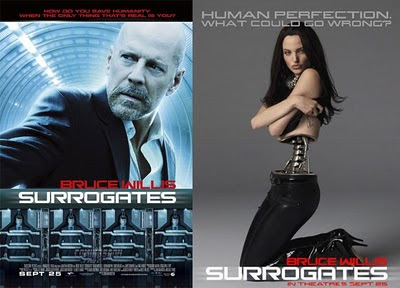 A new thriller from the author of the New York Times bestseller The Surrogates!

As a leading researcher at the Centers for Disease Control and Prevention, Dr. Laura Regan is one of the world’s foremost authorities on viral and bacteriological study. Having dedicated her career to halting the spread of infectious disease, she has always considered herself one of the good guys. But when her research partner is murdered and Laura is blamed for the crime, she finds herself at the heart of a vast and deadly conspiracy. Aided by three rogue federal agents who believe the government is behind the frame-up, Laura must evade law enforcement, mercenaries, and a team of cyber-detectives who know more about her life than she does—all while trying to expose a sinister plot that will impact the lives of every American.

Set in the Orwellian present, The Homeland Directive confronts one of the vital questions of our time: In an era when technology can either doom or save us, is it possible for personal privacy and national security to coexist? -- A 144-page Full-Color Graphic Novel with French Flaps