I've written about Mike Baron before, on this and other sites.  He and I don't always see things eye to eye, we might even disagree, but the great thing about Mike is that he is always about doing the best work, and being a good person.  I don't know of a talent in comics who is so open about his views and yet is beloved by people on all sides of the political or cultural divides.  I thank him for his answers to my questions.

Tell me about your writing process. From the start of a story to the end, how does it brew and how does it result in expression? Do you have a process that is repeated with each story, or do you find inspiration in a thing and then work it out in your brain before writing?

You never know when inspiration will strike, which is why I carry a pen  and pad at all times. Any serious writer should do this. Sometimes I just come up with a title I like, and then look for the story. Like "Drunk Octopus Wants To Fight." Other times I want to write a particular kind of story, like hard-boiled crime noir, which is what my Biker series is about. So I'm always looking for something that would make a good story. I always begin longhand in a notebook.

The characters. Who they are. What they want. Anything and everything that might belong in that story. Once it reaches a critical mass, I write an outline. The outline is designed to entice readers into the story as much as provide a guideline for me. I invariably veer away from the outline while writing, but maintain the theme. I see story. I see its valleys and peaks. A story is a dynamic narrative with a beginning, middle and end.

Like a good song, it has to have an enticing bridge and a killer hook. It can have many. Then I write. Each chapter must be between a thousand and fifteen hundred words. Not only is this a good length, it provides a modest goal for me each time I sit down to write. As any writer knows, if you create a compelling character, at some point, that character is going to turn around and tell YOU what happens next.

I know you had experience writing in university, and obviously that  would suggest you had training as a writer before the majority of your career took shape.  How much can someone learn in higher education that will have an impact upon their writing?  Can people without talents become a writer, solely through training and practice?

Writers are people who have to write. If you ain't writin', you ain't a writer. Certainly university courses can help, but they can't really teach you style. You have to find your own style. There is only one essential writing manual, ELEMENTS OF STYLE by Strunk and White. Which is not to say there are no other good books about writing. There are many and I have some of them. Can a person without talent become a writer? I suppose it's possible, but the odds are against it. I always had an unshakable belief in my ability to string words together. I don't know where it came from, but like most other writers, I had to clear out a million words of horse shit clogging up my system until I got to the good stuff. I wish I had studied writing more seriously in college, but I was smart enough to take courses with Joel Gersman, creator of Broom Street Theater, and Jerry McNeely, head writer for Marcus Welby,M.D. Jerry said, "You make 'em laugh a little bit, you make' em cry a little bit, you scare the hell out of them and that's entertainment."

In the present day, the world just saw that Chris Cuomo was fired due to a breach of journalistic ethics. What does a writer of fiction owe to his/her readers? Does calling what one writes to be fiction change the expectations of honesty?  Would you argue that the myriad issues leading modern culture to cancel creatives and public voices comes from a blurring of the line of fiction and non fiction?  If so, what does that say about the Hearst newspapers and Yellow journalism?

Journalism is another story. Cancel culture is the product of cowards and morons. Should Shakespeare have been allowed to write Othello? The question is absurd on the face of it. It's the writer's job to imagine  every point of view. If you can't do that, you won't be a good writer.

You can write a certain type of story. Murder cozies. But your reach will be short. What do I owe my readers? A good story. I write to entertain. I write to entertain myself as much as others, and that keeps me true to my vision. I suppose I could write a bodice ripper if someone waved enough money at me, but I'd rather not. I'd rather write the stories that appeal to me. Hard-boiled crime noir. Horror. And humor, as in Florida Man.

I think you've written some unique stories with even more unique characters. Along with just being able to write, from your natural gifts,  how does one endeavor creatively to write new stories, create new characters, and think things that challenge a reader?  Can that come from anything intentional, to cultivate or curate one's efforts to affect such a result?

Yes. You must intentionally find inspiration wherever you can. That's why it's important to always carry a pen and pad. You may hear a turn of phrase you've never heard before. Write it down. You may hear a name that strikes a chord. Like Evel Finklestein. Inspiration is all around us. All you need do is pay attention. You can pay attention to the news, to archaeological findings, to scientific break-throughs, or to some compelling, larger-than-life figure. A good writer should be able to come up with a story on the spot. Once at a comic convention in Madison, Neil Gaiman and Harlan Ellison sat at two desks next to each other and each came up with a short story. You can bet your bottom dollar they were good.

For a time in the 1980s and 1990s you seemed to be highly prolific and had works that were mainstream, independent, and even unusual and exotic.  Did your many areas of interest make that the case, or did you decide somewhere down the line, I am going to write what I want, and for as long as I am able, I'll continue to do so?  Does it come from any underlying philosophy?

Well I had a good run in mainstream comics until I fell out the ass end, and I blame nobody but myself for that. I was not yet the writer I am today and I didn't know how to play the game. Josh (Biker) Pratt is my version of John D. MacDonald's Travis McGee, the novels that first convinced me to become a writer. I am not alone. Many successful writers point to MacDonald as their inspiration. Randy Wayne White for example. My philosophy comes in three rules.  One: I am here to entertain you. I never lose sight of that fact. Every part of the story must be entertaining. No dry patches. You use every trick in the book to make this happen, including a seductive narrative voice, compelling characters, and intriguing situations. Two: Show don't tell. This sounds simple until you try it, and it pertains as much to prose as to cinema and comic books. Three: Be unique. We're all unique individuals, and when we find our own style, we necessarily bring our own experiences to whatever it is that we write.

Thanks Mike, where can readers of this find you online?

We are going to completely revamp the website and will probably start this month. That is, my wife Ann will. I would be nothing without her. 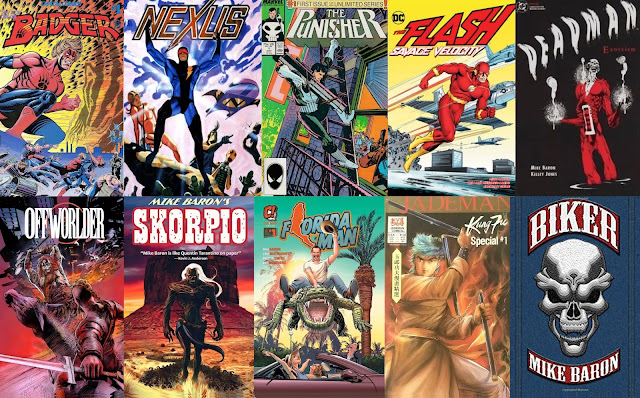