IN THE SHADOW OF THE SEVEN STARS & TENEBRION Reviews 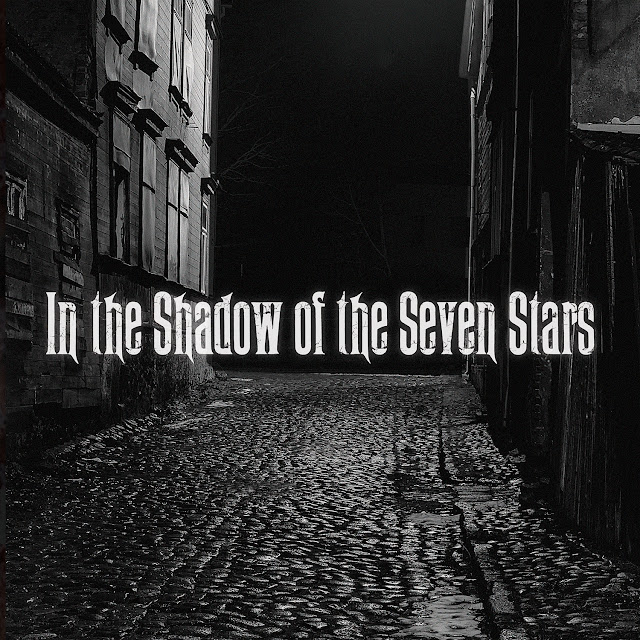 The work being considered comes from a collective of artists I've recently written about, have been moved by, and since Autumn 2019 I've interviewed two members of the band. I was blown away by the intellect and awareness of their creative life.  This work is a consideration of the life and tragic death of Frances Cole, who might have lost her life in the streets of Whitechapel, at the hands of Jack the Ripper. And just as I mentioned my bias about enjoying Aaron Kerr's ODIN in a previous article, coming from a mutual interest in the Viking culture and age, I have a positive bias regarding this work too. *

The CD has a story to tell, that of the dead woman, the killer and those who live in and around the two and the events of the time.  Frances Cole was murdered in 1891, in a fashion less brutal than the canonical five, but still dead.  If she was killed by the same hand, he was not acting as he had, or was interrupted in his act.  But the story is solid, and moving.  From the story of the woman, to the hunt by the killer, and society changing from innocent witness to eager readers of the porn-like vulgar news stories, there is a powerful lesson of tragedy.  But, the rhythm of the story is strangely less dramatic as it is presenting a story where the power is found in the events, not the framing of the story.  You hear the cries of murder, you see the step by step intricate trail and path of the killer, and you see how society mourns the dead, first in horror, and by the end of the work, they mourn the dead as being almost inevitable results of the society's guilt.

This work is one that anyone can enjoy, but people who've studied the Jack the Ripper historical story will find much to appreciate.  This isn't vulgar use of the dead, or their chosen labor field, it tells a story, and whispers and shouts for the listener to note various details that are powerful. Frances Cole may or may not have been one of the Ripper's victims.  But she was surely murdered, and the dichotomy of is she a victim of the specific killer or is she just a victim, isn't necessary to choose. There is a worthwhile sense of loss and horror at the relative worth people place upon life, and specifically upon life of a woman in the streets.  One of the most interesting notes in the story of this CD is that of the person who trails who they think is the murderer, who has left Whitechapel for America.

I am moved by this CD, for the sound, story, and layers of meaning. The musicianship is insanely good. The layers of sound are built to linger in the mind, as there are electric modern sounds alongside the timeless instruments of classical music. The lead singing by Jeff Crandall is quite remarkable. He uses different vocal styles, he evokes numerous sorts of talents and range. There will be those who say Tom Waits as the most likely in similarity, but his voice is good in all of the many forms used. The backing vocals on the CD all added to an ethereal quality. This is a sorrow song, that is only accentuated and made great by the diverse talent of Crandall's lead singing and layered background vocals.

My favorite songs were Boneyard, In the Shadow of Seven Stars, Bring Your Dead Back Home.  The Boneyard in particular speaks to a sense of loss and timelessness, where the listener has no choice but to realize, we are all living with no way out of dying. The somber tone and layered sound are perfect for an album of this sort. Beyond my favorites, the album has no bad or boring cuts.  The work is not hard to listen to, while at the same time, who would have thought of a concept album with an understanding of a subject and work so hard at creating an aesthetic power that is nearly unique in the fields of music it dances within. I've listened to this over 50 times in the last two months.  It hasn't lost an ounce of power in so doing.

*I've read over three dozen books, watched more than a dozen documentaries, and read through copies of original documents surrounding the murders and tracking of Jack the Ripper. I did all this researching for when I wrote my own book, from the perspective of the Ripper if he wrote poetry about his killings. I'd asked others to add to the work with their perspectives. One of the additional people was writer who was both a paralegal and researcher with a great amount of True Crime reading and expertise. Another writer was a Prison Guard who had a store house of info in her mind worth listening to. My choice of killer was first suggest by author James Tully who pointed his finger with his research towards a fellow named James Kelly, a man who'd killed his wife, blamed prostitutes for his contracting sexually transmitted diseases, worked in Whitechapel as an upholstery ripper, under the false name John Miller.  Jack is often used as a nickname for men named John.  The chosen labor field of being a ripper gave him another name, and certainly familiarity with his tools of slaughter. He escaped from Broadmoor mental Asylum.  For me he was the best candidate choice of a killer, in that, he was known to kill, hated the class of women who were killed, had training in his tools of trade, and he was also able to flee the region due to inheriting money from his mother, a woman he hated who he believed to be a prostitute herself.  The James Tully book is titled Prisoner 1167: The Madman who was Jack the Ripper.  I think it is a fine book, and whatever issues some various researchers might have, it is able to prove that Kelly was easily among the best argued suspects, even if particularly motivated Ripperologists disagee. 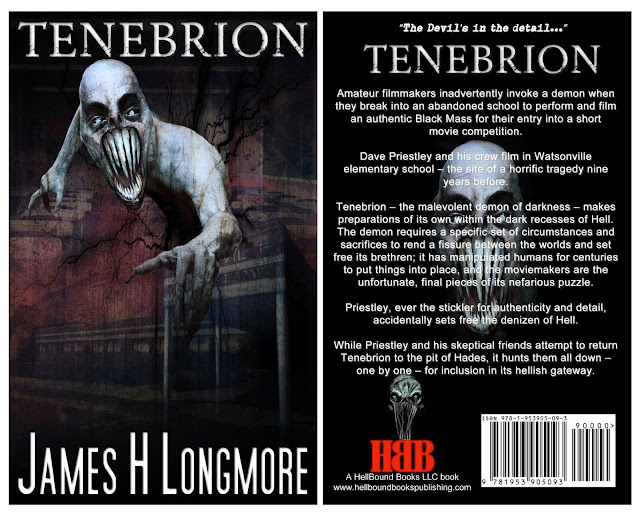 A film crew recreates a ceremony meant to call forth from the demonic layers of Hell, and they conjure or summon a virulent and malicious demon.

I've written in the past that I've appreciated some stories with demons, but not necessarily always.  The reason for this is that there are different approaches to stories with demons, and some do more than frighten you, they make you feel uneasy and uninterested in further reading.   Some approach horror as a relentless pursuit of the reader's attention.  Others take a more passive and layered approach.Some writers make the demon or demons, mindless killing machines. Some writers make the demon a clever foe. Other authors try to make him redeemable, if only for the main character to fail in the effort to redeem it.

TENEBRION is a dark story that quickly evokes a deeper kind of horror. This work logically produces a means to bring a demon into being upon the human plane of existence, and by doing so, releases into being a beast that will stop at nothing until it has slaughtered or defeated its perceived enemy. In this case, after the movie crew follows directions to bring a demon upon the human plane of existence, in their fiction, they learn, much to their horror, that they've brought what they considered fiction, into reality.

Beyond how dark a work is, is how light the moments that are not spent dying or being attacked are spent.  There has to be a balance, so that the reader finds reason to return to the work at hand.  Also, There is in horror a greater impact when the reader cares about the humans being hunted or killed.  Some try to show the power of an evil being, by body counts, and that almost always means the victims won't feel like they mattered to anyone. That not only doesn't happen here, but the deaths and demon attacks all have greater power for how the writer of this respected each character.  I would definitely recommend this for people who like stories of darkness.  I appreciate the opportunity to have read this, and think for people who need a high body count they might still enjoy this, but for mature minded readers, it will ring true, and full of horror.  The cover is incredible too.

ABOUT GETTING REVIEWS FROM MEFirst off, I can be found on Facebook, Twitter or through email at Alexanderness63@gmail.com. I accept hard copies, so when you inquire at any of these places, I'll follow through by telling you my street address. I no longer have a post box, although I regret that.  It was a crushing defeat to no longer have a p.o. box, when I came to realize I was getting so little product it made no sense to pay for the privilege to not receive mail at both my home and at the post office. If you send hard copies for review I will always review them, but if you prefer to send pdf or ebooks to my email, I will review these at my discretion. I don't share my pdf/ebooks, so you can avoid worry that I'd dispense them for free to others.My Poetry Blog AlexNessPoetry.Blogspot.Com
All of my Published Work  AlexNessPoetry.Blogspot.Com/2007/01/My-Work.html
My Amazon Page Amazon.com/author/AlexNess
Lovecraft Horror CthulhuDarkness.Blogspot.Com
Lost Worlds AlexNessLostWorlds.Blogspot.Com