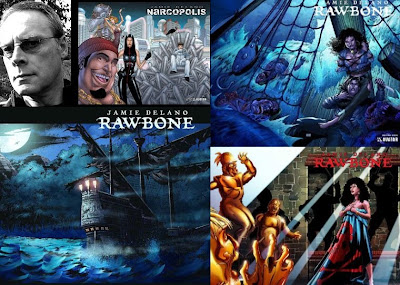 RAWBONE
Jamie Delano
Max Fuimara
Full Color
Avatar Press
(In case you didn't figure it out, this is rated mature.)

Jamie Delano is a writer of importance, who writes, oddly enough, in the world of comic books. His work is challenging to people who desire only pabulum, for it creates whole cloth new paradigms and criticizes through fiction existing paradigms. His writing is an equal in quality, or better, to the name talents of the UK and Ireland. Alan Moore, Neil Gaiman, Grant Morrison, Warren Ellis, Garth Ennis, Mark Millar, and Paul Jenkins are all talented, but none write the sort of stories that Jamie Delano does. In his most recent previous work Narcopolis, Delano questioned openly the future where drugs replace moral/ethical choices. He created in it a new language that was born from his perception of the world that would spring around that sort of culture. And some people did not understand it. The drug use was not condoned but it was also not, judgmentally critiqued. And some people did not understand that. Delano’s works do not allow the reader to make simple judgments because he does not.

RAWBONE starts from a premise of Pirates in the Caribbean, but there is so much more. For one thing, pirates were the scourge of the sea, at one time, but Disney, ala Johnny Depp prettied them up into heroes. Delano refuses to kiss the ass of current popular culture. In fact, he loses his foot up that same ass, by making his characters nasty, and, at this point irredeemable. This story is dark and lush, and it plays with our expectations, and makes the Church as evil as the pirates, but, as with most of Delano’s works, there are no simple answers, and the answers you are likely to come up with are at this point, lacking.

From the solicit “Jamie Delano cuts loose on a vicious pirate tale, delivering a bloody, terrifying vision of a world on the high-seas! But these are not the family-friendly kind, these are the roughneck, stealing, heartless bastards of the 17th century Caribbean. A rebellious young women named La Sirena has built a haven for pirates called Puerto de los Suenos (Port of Dreams). It is a good life for those that want to live outside of the crushing boot heel of the Church of England. But the church is a powerful enemy. It expends a lot of its pillaged wealth to bring about the downfall of the pirate scum who are praying on merchant vessels. Thus, the legend of La Sirena’s life will begin, one drip of blood at a time, while the British garrison waits for the pirate to slip into their ambush, tension building as seeming supernatural forces pick off the forces of law one by one, and imagination runs terror through the survivor’s veins.”
Posted by alex-ness at 7:19 PM 2 comments: Links to this post

American Culture: In Guns We Trust? 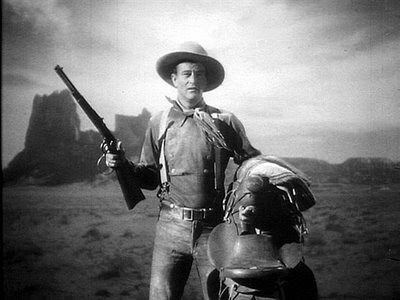 I am not always able to see why people disagree, Republicans and Democrats in the American political system should both have the best interest of the country at heart, right? Christians, Jews, Hindus, Muslims, and Buddhists all believe in some form of system where good behavior and moral beliefs are vital. They should have a great deal of common ground. Women and men both desire love, and pursue it, however poorly or misdirected. But in all these examples, they don’t get along, however much they should be able to do so. I cannot understand it, but I recognize that it happens.

On the other hand, I fully understand why people who own guns in the United States do not intellectually find common ground with those who do not own guns. Gun owners trace the independence of the United States and American people to a well armed civilianry. They consider how free Americans are societally, and they attribute that freedom to being able defend their freedoms from governmental intrusions. Beliefs such as these are difficult to argue for or against without passion. For while Gun culture has beliefs regarding the ownership of guns or the right of ownership, those who disagree, and do not own such weapons also have beliefs. They believe that if guns are available that people who aren’t interested in self defense or sport shooting or hunting will be able to acquire a gun and use it in the committing of a crime. They suggest that the Second Amendment to the Constitution in the Bill of Rights provides for a well armed and trained Militia, not everyone wanting a gun. They also point to accidents that happen and take lives due to guns being a dangerous tool in the hands of the inexperienced or careless user, or worse, child.

“After a shooting spree, they always want to take the guns away from the people who didn't do it. I sure as hell wouldn't want to live in a society where the only people allowed guns are the police and the military.” - William S. Burroughs

I am explaining all this because Gun culture in the United States does influence the popular culture, the knowledge of the past, the beliefs about the society and nation. Guns are part of the American scene, and guns are symbolize things to both sides of the argument. Guns are dangerous. But to the gun owner they are a good danger, one that threatens criminals, defends property, and keeps the government from taking more than just the gun away, but all rights. Guns are dangerous in a bad manner to those people against gun ownership. The danger is not misunderstood, bullets kill, but motives, scenarios and circumstances help to make the argument one with few winners, just angry expressions and disagreement.

“It's just a ride and we can change it any time we want. It's only a choice. No effort, no work, no job, no savings and money, a choice, right now, between fear and love. The eyes of fear want you to put bigger locks on your door, buy guns, close yourself off. The eyes of love instead see all of us as one.” - Bill Hicks

“Some parents say it is toy guns that make boys warlike. But give a boy a rubber duck and he will seize its neck like the butt of a pistol and shout "Bang!"” - George F. Will

I am not suggesting here, for any reason, that either side is correct. I simply pointing out that within what we call popular culture are views that are often part of the whole view, but disagreed upon. Gun culture is part of American culture, but not everyone agrees that it is a good thing.

“And the National Rifle Association says that, "Guns don't kill people, people do,” but I think the gun helps, you know? I think it helps. I just think just standing there going, "Bang!" That's not going to kill too many people, is it? You'd have to be really dodgy on the heart to have that…” - Eddie Izzard

((I will certainly be asked by reader emails if not via comments, if I own a gun. I come from a family that did not hunt, but my brother does now. My best friend is a gun toting Libertarian, and in high school I was one of the very few males who attended school during Deer Hunting. In Wisconsin if you didn’t hunt deer, you were not normal. I do not own a gun, but I grew up in a part of the country where hunting was the norm. I do not find myself desiring to own a gun, but I am not against the ownership of guns. I think most of the problems come down to the fact that nobody wants criminals to be able to acquire guns, but we know they will. So how do you prevent it, at the same time as allow gun ownership? I don’t have an answer, but I am not saying all gun ownership should end because criminals violate other people’s rights. In fact you could argue that gun ownership protects you in those cases. So I am a tweener.))
Posted by alex-ness at 11:14 PM 4 comments: Links to this post