Comics for decades were comfortably accepted as written or intended for children, and any step out of that was considered abnormal if exciting and good. The market for comics therefore was young, and anyone older reading and buying comics was considered, young minded if not less than bright. Over the years as the medium of comics grew more efforts were made to make comics more mature as both the art standards and story standards improved.

The maturation of the comics world came at the same time that the world of youth matured, in response to the US involvement in Vietnam. That era found people of all ages becoming more divided in values, between young and old, liberal, left, conservative and right, and Democrat and Republican. The Civil Rights Movement added a degree and layers of turmoil to the cultural stew, rightly, and all of the world seemed to turn upside down. Comics grew up slowly, with small steps, but by the time of the middle 1980s and Watchmen and Dark Knight Returns comic books reached a plateau of mature content, that has not returned to former levels. This meant something, along with the shedding of Comic Code Values and self censorship, the comic book industry would begin to shed young readers, as it focused more and more upon the comic book buyer with money to buy weekly comics, ... the 18-28 year old males. Over time as the market became more and more specialized in content and sales efforts, so too did the readership becoming smaller and more hardcore. In recent years this trend has become extreme, with the sales being more aimed at an elite audience and the buyers being fewer in number.

Children can find comic books in stores now, but rather than being able to pick up anything they have to use considerable parental help, or comic shop guidance to finding the grail of their quest. Thanks to my efforts with my son he has a collection larger than my own, but, not too many parents have time for that. Well I have the solution for that. GRAPHIC CLASSICS. They put literature in the form of comics, allowing adults to read great even maturely aimed stories, and kids to be able to read these great works that due to the medium are perhaps easier to digest, that cause their own interest in both comics and literature to grow. I really cannot see a better tool for getting kids into books, and getting adults into comics. Posted by alex-ness at 3:02 PM No comments: Links to this post 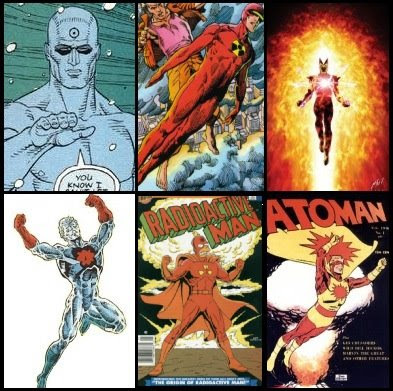 Americans won the Pacific war by dropping two Atomic bombs. American hegemony over the world did not last long, but the near worship of the bomb as the savior and defender lingered long.

Japan was defeated in the end of the Pacific war by use of two Atomic bombs. Seeing their world being destroyed without the ability to stop the destruction, the Atom bomb was a weapon of devastation and horrible consequence, poured out by a conquering army. When the conquering nation later occupied their nation, a cult of victimization grew, as the only nation to be attacked by the holder of the power of the Atom.

Do not presume here that I am aiming my view at the morality of use of nuclear power. I am no expert. However by looking at how popular culture mediums, particularly, comics, film and animated films, between the cultures shows immediately that one country sees the Atom as being Godlike power to be used by a hero, and, the other, that the destruction caused by nuclear weapons is devastating and irresponsible and completely without response.

The existence of cross country values is very interesting to me, for it shows what is important, and how our own cultural views become skewed by our experience.
Posted by alex-ness at 3:07 PM 1 comment: Links to this post

Nothing to Fear but Fear itself? 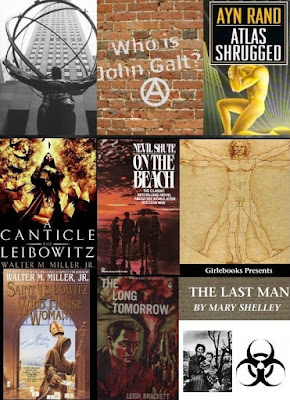 They say, (whoever it is they are), that popular culture mediums reflect, and do not themselves create. The hype over the film Natural Born Killers inspiring murders that didn’t happen, did reflect a tendency to attach consequence to art, when in fact, art reflects consequence. But even then, Oliver Stone suggested that the genesis of the story came not from art but a reflection of society. But his model of killers becoming famous and celebrity was more outrageous, than accurate. The true genesis of his story is very clearly a case of a then conservative culture becoming spellbound at the horror of an event. When a car accident, extra bloody, occurs, we look. We don’t want to, but we do. It is not a guilty pleasure, it is a sense of horror that makes us look. We don’t believe the reality we see, so we stare. IT IS FEAR.

But, it is true that when something odd happens, or change is present, we seek to understand what it is, through creative mediums. Disaster, catastrophe, rebellion, and war all present the creative mediums with opportunities to consider what MIGHT happen if... and usually the underlaying cause is fear.

When Bill Clinton was President of the US, we saw gun sales and fear go up on the side of the right and off right. When George W. Bush was President of the US America caused gun sales and fear on the side of the left (in Latin America) and fear in most of the rest of the world. With President Obama in office gun sales have grown, and fear of both an impending financial disaster and the ongoing Global Warming and catastrophic implications of that cause responses in people, out of fear, and desire to know more.

Ayn Rand’s creative work in general and in particular her work ATLAS SHRUGGED has been seeing a mass response in the time since Obama took office. Are the core values of America being challenged? Well, fear of that perhaps. But beyond that, Libertarian (Ayn Rand would approve of Libertarianism, mostly) values are being reflected in the move, in America from party politics to value politics. When the Republican party lost in 2008 most were awestruck by the depth of it. But what has risen in its place, and by much of the left if not party Democrats, is a dismissal of party, and party platforms. And this will change politics at its core, because while Republicans talked a good game on anti abortion values, the real holders of those values are people who are not in line with much of core Republican views.

Global warming might not be what various critics from either side of the debate say it is, or is caused by, but it is happening. Environmental catastrophism is going to ring truer than ever in the coming years, to the point where there will not be a debate. An alarmist film such as Soylent Green from the 60s and 70s could not have happened with such power in the 80s to the present, just because the fear in the culture of it happening was at the back burner.

A world wide outbreak of disease, plague has been a fear of humans since we’ve been aware of our world around us. In the world that sees AIDS in Africa killing huge numbers, fears of Swine Flu, SARS, Bird Flu, Ebola, and more, just how freaking prescient was Mary Shelley to have perceived the LAST MAN to be one due to disease world wide? Very.

And now that Iran just test fired a missile, and has been considered close to being within 2 - 3 years of a nuclear weapon, should it develop one, how much must nuclear apocalypse be upon the minds of people, fear of that is enormous, if not as great as during the Cold War.

Fear causes people to look, out of a desire to know.
Posted by alex-ness at 10:51 PM 2 comments: Links to this post

Racist popular culture... even OK by some

Would a team named the San Francisco Slanted Eyes be ok?
How about the The New York Negro? Or Brooklyn Black Skins?
How about the Kansas City Kikes? Harrington Honkies?

Why is the name REDSKINS ok and not racist?

Because the overall majority of the culture doesn't care about the feelings of the Native People.

Sports is entertainment, Entertainment is part of culture, popular culture.

And yet, racism is ok there.

Hmmmm... discuss this amongst yourselves while I go get a dictionary...

Redskins Not considered racist?
Posted by alex-ness at 2:35 PM 2 comments: Links to this post

Labels: What a load of shit 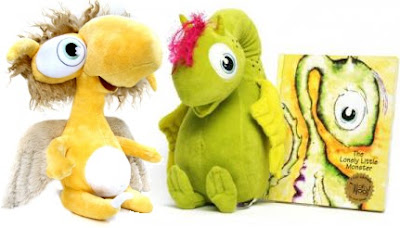 I had the great fortune to receive a product in the mail from WorryWoos, a maker of plush animals and story books. I do not have a child the age who’d be into this but, I certainly would have had one 6 years ago... The toy line is perfect for children, the plush animals personify a worry, and the story will help comfort them. The more I see in this world with people in pain, children in crisis from circumstances and bad parents, I worry. This is a product that deserves credit on my different levels, it is fine quality, it is tender and sweet, it is fun, it is pretty.

Now, we could spend time worrying over kids, and thinking is this going to solve all the problems I allude towards, but the answer is obviously not. But if someone is in pain, and you can alleviate that pain, isn’t that a good thing? I say it is.

This product is perfect for kids, and I give it my whole hearted thumbs up, well as much as my arthritic thumbs can point upward.

(May 1,2009- Jersey City, New Jersey,) Worry Woos.com announced today that beginning May 1, 2009 there will be a new monthly contest at www.worrywoos.com. Participants are asked to send in their artistic rendition of their own WorryWoo monster for monthly entry into a drawing for one WorryWoo book and plush doll of their choosing! While yes this contest is intended for children, the young of heart are welcome as well. All submissions should be sent via email to andi@worrywoos.com or by USPS mail to WorryWoos.com, P.O. Box 273, Jersey City NJ 07302. The first winner will be announced June 1, 2009 and all participants artwork will be posted on the website regularly.

Andi Green, WorryWoos Creator explains, “So many people are having such a tough time and kids are like little walking sponges. They take all the stress and fear in regardless of age and they simply don’t know how to handle it. This is our little way of helping everyone vent! And seriously, what could be better then making monsters?” The existing worry woo monsters can be see in the product section of the www.worrywoos.com.

For more information on the product line, visit WORRY WOOS. For terms on carrying the WorryWoos product line email andi@worrywoos.com.

The Worry Woo Monsters, a series by Andi Green, was first seen in a New York City art exhibition in 2001. Originally called The Monsters in My Head, Green wanted to create characters with a story that each embodied an emotion. From loneliness to confusion, she began tackling complicated feelings and transformed them into quirky, loveable characters. Her message of “embrace your emotions” received such a positive response, she was asked by many if she ever considered turning her single art pieces into storybooks. In 2002 she began to expand her concept, but it wasn’t until 2007 that she decided to publish and produce her new collection. The Worry Woos have won multiple awards and can be found in toy stores, specialty gift stores, and museum stores nationwide including the renowned MOMA gift shop.
Posted by alex-ness at 7:58 PM 1 comment: Links to this post