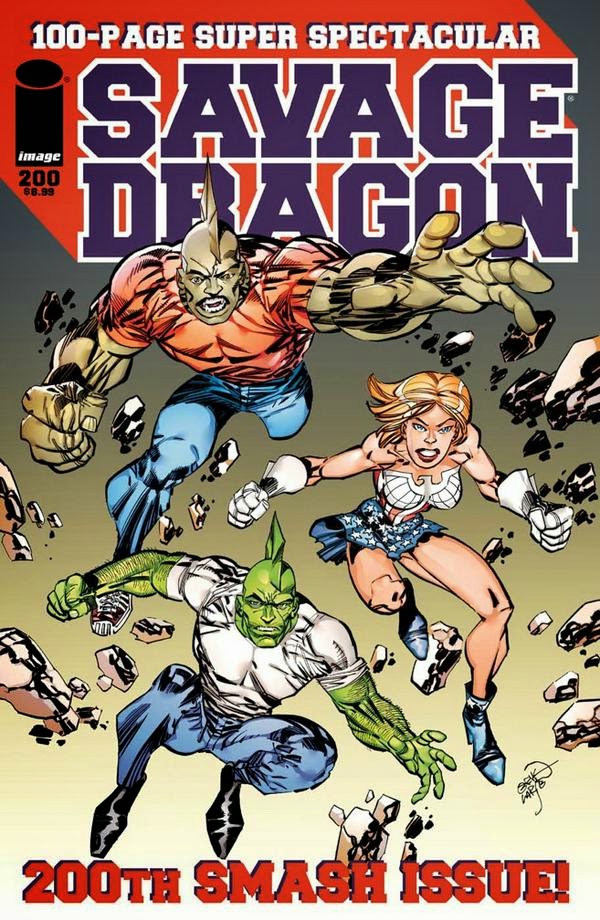 Erik Larsen has been involved in the comic book business since 1982, when he self-published his first comic, Graphic Fantasy, which contained the first incarnation of his most notable character, Savage Dragon. The character was simply called The Dragon on the cover.


He later became a paid professional when his illustration of two of his other of characters, Vanguard and Mighty Man, was published as the back cover of Megaton #2 in October 1985. A Vanguard story and cover (fighting Savage Dragon, no less) for Megaton #3 gave him the traction to make a sustained effort doing what he loved, making comic books.


After working for a couple of smaller publishers, he broke in to “The Big Two” when he was hired to draw DC’s title Doom Patrol. After building a reputation at DC, Erik was given the chance to work for Marvel comics. He then worked for both companies until he was asked to take over the Amazing Spider-Man when Todd McFarlane moved over to launch a new Spider-Man title in 1990.


In 1992, Erik was one of the founding creators who formed Image Comics seeking more control over their creative work. It was at Image that resurrected Savage Dragon, along with Vanguard and Mighty Man. Although he has worked for both Marvel and DC since the launch of Image Comics, he has continuously published Savage Dragon for over twenty years.


If you want to Google his name make sure you spell it properly, Erik Larsen, otherwise you might get a historic Disney animator (Eric Larson) or a contemporary journalist and author (Erik Larson).

Paul Ewert: As one of the founders of Image you’ve blazed your own path and as such have acted as publisher, president, chief financial officer, as well as creative talent. Your work, Savage Dragon, is approaching issue #200. Dave Sim’s Cerebus reached issue #300. Do you see yourself reaching that milestone?


Erik Larsen: I certainly hope to, yes. It’s a goal—a benchmark—and once reached I’d like to just keep on going.


PE: What does it feel like to have published two hundred issues of a book that you control creatively?  To what extent is an issue number arbitrary, could you keep going far beyond 300?  How about 400?

EL: Or beyond. It would be nice to set the kind of record that people would look at and say, “Okay…maybe I’ll try for the #2 spot.” 500 issues plus would be pretty awesome but that’s going to depend on readers hanging in there. I can’t do this without them.


PE: You helped Image attempt to bring back Supreme.  Why did you take on that title?


EL: It seemed like a good idea at the time. I had a take on it that I thought was pretty fun and when Eric Stephenson and Rob Liefeld were talking about the books I threw out my 2¢ and said, “well, this is what I’d do…” and they both looked at each other dumfounded and proceeded to try and talk me into doing the book.


PE: What made it such an attractive project?


EL: It had possibilities and I had a story to tell. There was also an unpublished Alan Moore script and I’d never illustrated one of his stories so that was kind of an attraction.


PE: Were you surprised that no one has stepped up to take on Supreme after you left?


EL: Not really, no. None of the titles performed spectacularly and a few didn’t really take off at all. Supreme really wasn’t attracting sustainable numbers.


PE: What elements of your work do you keep consistent? How as a creative talent do you make sure you do that?


EL: Certainly I make an effort to keep the characters looking relatively the same from issue to issue. There’s a certain dynamic that seems to be present. There are certain things which just seem to stick.


PE: Does that mean the “humanness” of your characters just naturally occurs when you write them? That the visual angles in panels are just unconsciously locked in to the right dramatic effect? Panels connect together properly so they set the pace of the story as you want it to flow? If so, how can I get me some of that?


EL: It’s funny but it does almost work that way. A couple of lines of dialogue in and it becomes clear what a given character would or wouldn’t do or say. They “find their voice” and anything which contradicts that just seems wrong and doesn’t ring true. With the art as well…that character wouldn’t stand like that or move like that. It would be like putting the Thing in a Spider-Man pose. It just looks weird and feels wrong.


You can observe the same thing in the real world. There are people that carry themselves as though they think they’re hot stuff and others who clearly have less confidence.


As a storyteller you develop a feel for those kinds of things and that’s a big part of why some characters feel real while others seem so shallow in another writer’s or artist’s hands. I can remember sending in notes when we were doing the Savage Dragon cartoon because so much of the dialogue was utilitarian. It got the characters from one place to another but too little of it showed personality. You didn’t learn who the characters were through their dialogue and in the real world you can’t help but learn that.


Overhear a conversation and in half a minute you’ll be making judgment calls…that guy’s a bit of an asshole. She doesn’t listen to anything he says. That kid really wants attention. That sort of thing. It all adds up. It all means something and if you’re doing your job well the reader will see the pattern and recognize the characters. “That’s just like something Kill-Cat would do” and even fill in the blanks (“I know just what he’s thinking”) based on past experience.


PE: How important are Good and Evil to the telling of your stories? It is often we hear about the root of all evil, but what is the root of all good?    How can a creative talent work to show that, or celebrate THAT?


EL: I haven’t dealt a lot with absolute evil. Largely I go with the idea that “everyone is the hero of their own story” and build off of that. The key is motivation. Why do you do what you do? What do you want from that? Fame? Glory? Love? Money? Comfort? Revenge? Satisfaction? Accolades? Sometimes it’s as simple as a lack of imagination and a need with a given character. I’m hungry now. My family is hungry now. Our rent is due now. How can I solve this problem now? And people justify their actions in any number of ways. Stories flow from that.

PE: Working in creative professions can be very difficult without emotionally supportive people around you. Have you had any family or friends whose opinions of what you do changed over your career? Was it emotionally dramatic or anti-climactic to find that out?


EL: Nothing has been all that dramatic. I was a kid that drew all of the time. I started drawing comics for my own enjoyment when I was very young. So these guys were pretty much used to the idea right out of the gate. In my immediate family we all have our own interests and this is just dad’s job. My wife and kids don’t read comics. My youngest read Scott Pilgrim and a couple other things but not a lot. He’s the most interested in it. He’ll ask what I’m doing and even offer suggestions. Plus, I have friends in and out of comics that I can bounce ideas off of. That’s pretty great.


PE: So you’ve never had an uncle who badgered your parents to get you to get “solid work” in construction or banking and then had to admit that you have done well for yourself as a “kiddie book” artist?


EL: Nope. Never. My dad refers to them as funnybooks at times but he calls them that to be a goof. It’s not said in a way to demean them. My folks were pretty supportive.


PE: Along with Jack Kirby, who are the artists who have had a strong influence on your style and work habits?


EL: There’s a lot of Walt Simonson, Frank Miller, Klaus Janson and Terry Austin in the mix. Herb Trimpe was an early influence--the first guy, really. I grew up on his run on the Incredible Hulk. John Byrne came somewhat later. I channel a lot of guys picking up effects here and there. When I was on Spider-Man I was looking at Steve Ditko an awful lot. Jack Kirby is the big one.


PE: What was the most outrageous fun that you had while working on a project? Why was that?  The people you worked with, the subject matter, the publisher giving you freedom?


EL: There’s no one breakout moment that I can point to. Certainly the unlimited freedom I have now is incredibly liberating. I dipped my toe back into the Marvel/DC pool a while back and the contrast is amazing--and I was given a lot of freedom then--it’s just not the same thing.


PE: Describe the contrast you felt when you “dipped your toe back in the Marvel/DC pool?” Was there something you used to accept as “part of the job” back in the day that rubbed you the wrong way this time? Has work-for-hire changed that much or has doing creator-owned work opened your eyes wider to creative freedoms available to you?


EL: There was a plot which we had set in motion and the editor realized, somewhat late in the game, that was too similar to something which was going on in another book with the same character and we had to scramble to make changes and come up with an alternative that made some sense. I don’t think we were able to quite pull that off and the end result was kind of a nonsensical mess. I couldn’t help but think…this wouldn’t have happened in my own book. It may even just be in my own head but the sense I got seemed to be that I needed to check in regard to a lot of things.


At this point I don’t think I could go back. I’m so lost. I really lost the thread on all of these characters and don’t know where any of them stand. I’d have to just make up new stuff for the most part and if I’m doing that…what’s the point? Why bother? Why not just do it on my own in my own book where I don’t have to answer to anybody? 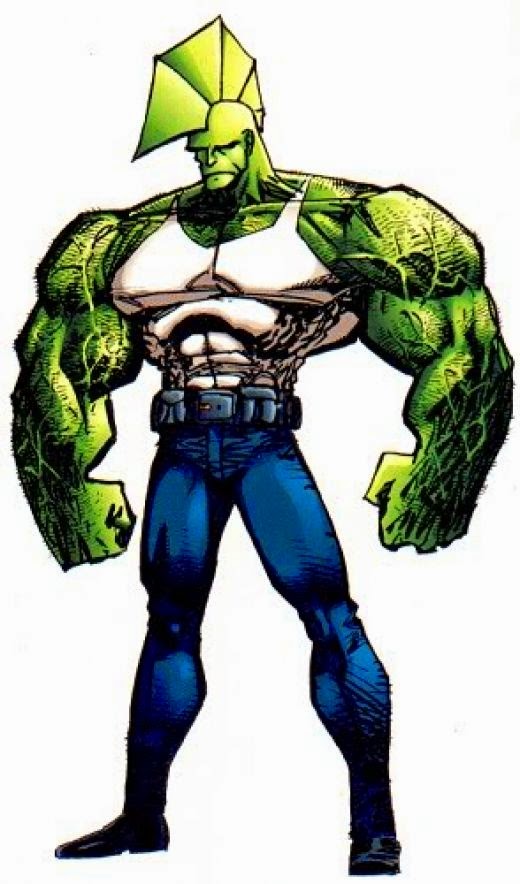 PE: What change, since you started in this business, has made the biggest impact on you and your work?


EL: Computer color and the advent of the internet has made the biggest impact. The reality that I can scan in pages and email tiffs to be colored by a guy in Greece is amazing. That I can make my own corrections in a computer program on my own computer in my home is fantastic.


PE: As a successful artist you work in an industry that chews up and spits out creative talents.   The failed attempts at careers far outnumber the success stories.  What is the best advice for beginning artists?


EL: Be humble. Be helpful. Make your deadlines. Learn your craft. The guys who vanish do so for a reason. Either they’re not very good or not very dependable or not easy to work with. It’s really hard to break into comics--it’s incredibly easy to break out. Each job you do is the job application to get your next job. If you do bad work or blow a deadline or start being a headache--it’s very easy to walk away from you. You are easily replaced.

Posted by Paul Ewert at 3:23 PM No comments: